A Mauritanian court has sentenced eight men to prison for acting too feminine in a video from a birthday party.

Prosecutor Accused Them of “Imitating Women” 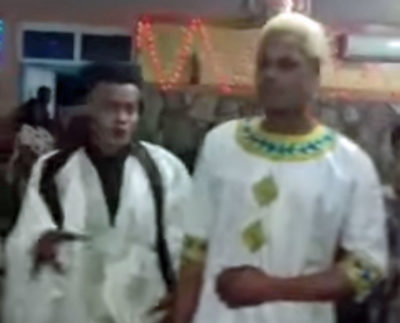 A Mauritanian court on January 30, 2020, convicted eight men of “committing indecent acts” and “inciting debauchery,” after a video showing them celebrating a birthday party in a restaurant led to their arrest, Human Rights Watch said today. The court sentenced all eight to two years in prison.

Police arrested the eight men and two other people on January 23, three days after the video circulated on social media. While the Western Nouakchott police commissioner, Mohamed Ould Nejib, acknowledged in a television interview on January 22 that the event was not a same-sex wedding, as had been reported on social media, but a birthday celebration, he stated that the people were arrested for “imitating women.”

“Mauritania’s authorities have no business sending someone to prison for attending a peaceful birthday celebration,” said Graeme Reid, the lesbian, gay, bisexual, and transgender (LGBT) rights director at Human Rights Watch. “They should immediately release all those who were sentenced to two years for attending this party.”

The eight men were sentenced to two years for “indecency” and “inciting debauchery” under articles 264 and 306 of the penal code. One woman received a one-year suspended sentence for participating in inciting debauchery by being present at the event. The restaurant owner was acquitted.

Human Rights Watch spoke with Mohammed Ould Obeid, the defendants’ lawyer, and reviewed the police report, which refers to eight of the men arrested for attending the party as “sodomizers” who were “imitating women.” According to the police report, the eight men “confessed that they are homosexuals” during police interrogations, at which the defendants had no legal representation. Ould Obeid said that at the trial, the defendants pleaded not guilty to all charges and refuted allegations related to their sexual orientation.

Article 308 of the penal code prohibits homosexual conduct between Muslim adults and punishes it with death for males. No one has in recent years been sentenced to death for homosexual conduct, as far as Human Rights Watch has been able to determine, and a de facto moratorium remains in effect on capital punishment.

On January 30, as a result of the matter being considered in flagrante delicto (caught in the act of committing a crime) based on the video posted online, the public prosecutor sent the case directly to trial the same day rather than to seek preliminary judicial investigation.

Human Rights Watch has reviewed the video that was circulated on social media. It shows people at a party singing and dancing, but shows no behavior anyone could object to as illegal as reasonably defined.

On February 3, Ould Obeid filed an appeal on behalf of the defendants.

The police appear to have arrested the men on the discriminatory basis of their appearance and behavior, describing them in the report they submitted to court as “imitating women” and “sodomizers.”

The first article of Mauritania’s constitution guarantees equality for all citizens and Article 10 guarantees citizens the right of freedom of expression. Freedom of expression is a right afforded to everyone, not only for people who express themselves according to notions of gender expression that the authorities deem acceptable, Human Rights Watch said.

As party to the International Covenant on Civil and Political Rights (ICCPR), Mauritania is required to protect freedom of expression for everyone regardless of their sexual orientation or gender identity.

The Human Rights Committee, which interprets the covenant, has made clear that it is prohibited to discriminate based on sexual orientation in upholding any of the rights protected by the treaty, including the right to free expression. The United Nations Working Group on Arbitrary Detention has held that arrests based on sexual orientation are, by definition, human rights violations.

While parliament adopted a new law in 2017 to combat discrimination, the law contains provisions that could be used to imprison people for nonviolent speech. On October 17, 2019, the UN General Assembly confirmed without challenge Mauritania’s bid to join the UN Human Rights Council for 2020-2022 despite its record of imprisoning and punishing outspoken critics of the authorities.

“The authorities appear to have imprisoned the eight defendants on the basis that singing and dancing at a birthday party is a crime in Mauritania,” Reid said. “Mauritania can’t shy away from its obligations to protect basic rights of all its citizens without discrimination.”

Loading...
Newer Post
Tanzania’s anti-LGBT crackdown: ‘If we won’t get services we will die’
Older Post
Uganda Muslim pleads innocent at trial after marrying a man