LGBTIQ+ Nigerians continue to benefit from the support provided by volunteer counselors via the Qtalk app. (Third in a series) 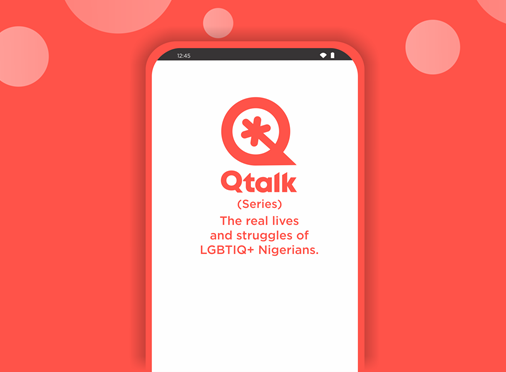 Qtalk users’ names have been changed in the following writeups, contributed by the counselors who provide advice via the Qtalk app:

Eve, a Nigerian trans woman, is in pain after her transphobic dad put fire in her hair while she was sleeping.

“I am stuck here in a hospital in Akwa Ibom state. My father put fire in my hair while I was sleeping because he believes that I am possessed with a spirit from the river. He said I am a disgrace to him for acting like a girl. I am here in a hospital battling with my life. The whole left side of my skull is completely burnt off. I hate him so much”

A 24-year-old Nigerian gay man reached out for help via the Qtalk app after officers of the Nigeria police arrested him and poked his anus with a stick.

“Please help me, I am in pain. I was arrested by the Nigeria police in Abia State after they lured me to a location using a friend’s profile on Facebook. I did not know that it was a trap. When I got there, they arrested me, went through my phone, saw some photos, and accused me of homosexuality. They poked their stick in my anus several times with their stick after I denied that I was gay. I spent 14 days in a cell before they eventually accepted 80K naira [about US $21] from me and let me go. The money was meant for school. I am in deep pain since then and I really do not know what to do,” he wrote.

His counselor provided psychosocial support, informed him about the option of seeking help from a human rights lawyer, and then referred him to a facility close to him where he was able to get treatment and further counseling.

A gay teenager is currently homeless after his homophobic parents found out about his sexuality and threw him out.

“I need a place to stay. I am 17. My parents found out that I am gay. They searched my school bag and saw the notes I received from another boy. My mother was angry and made me confess to her. She told my father and he asked me to leave the house. I refused but he came into my room to pull me out. I am with some friends but they won’t let me stay for too long,” he wrote.

A safe house is not available near where he lives, which means that he will have to travel. Currently, the Qtalk team is looking at how they can put him in touch with other groups close to him and then see how he can be supported.

A lesbian youth Julie is under pressure from his boss to be sexually intimate with him. If she refuses, he threatened to out her to her family.

“Can someone here tell me what to do? I am under pressure from my boss, who is asking me to have sex with him. He knows I am a lesbian and even knows my girlfriend and my mother. I live at home with my mother, who is a single parent. If she finds out, she will ask me to leave her house,” she wrote.

During the counseling session, the counselor made Julie understand that she was being blackmailed by her boss and that was a crime. She was also informed about legal options she could explore with the help of a lawyer if she needed one. Julie has not yet decided what she will do.