Tunisian activists this week joined forces to seek the removal of homophobic social media influencer Lady Samara from Instagram, where she has about half a million followers. 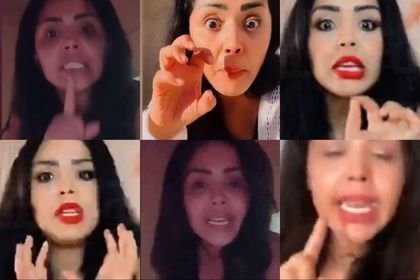 Images of Lady Samara on Change.org.

The joint statement came in the wake of widespread complaints about a homophobic outburst by Lady Samara in early September.

Lady Samara, a Tunisian content creator, has been using her platform on Instagram to spread hate speech against the queer community in Tunisia.She mockingly speaks to her followers rising up to 445K on IG devaluating homosexuals. She started her speech with “I accept them as human beings” then went on saying slogans like “they have no morals or principles / I cannot stand seeing such disgusting dirty acts”.

This Instagrammer was not ready to debate the topic and kept on encouraging her followers to speak up against homosexuality, not to be afraid to express their homophobia, and to avoid interacting with queer people. …

All three called on Instagram to enforce its rules against “hate speech inciting to violence based on sexual orientations, gender identities and expressions and sexual characteristics, and to commit to taking the necessary and rapid steps to reduce its negative impact on the platform and in real life.”

In addition, Mawjoudin and Damj offered to help Tunisian LGBTQ community members who have suffered because of Lady Samara’s harmful influence by providing them “a space for psychological, medical, legal and digital support.”

They state, “Do not hesitate to ask for help.”

This is the text of the joint statement by Mawjoudin (We Exist), Damj, and Access Now Tunisia:

Recently in Tunisia, social media platforms have witnessed a prevalent spread of hate speech and incitement to violence against the queer community, following inflammatory statements by a Tunisian “influencer” called “Lady Samara” on the Instagram platform, who used her influence on her followers to spread hate speech, insult and mockery of the queer community. She played with words so that the incitement was not direct, as she used phrases such as “I do not respect them,” “they lost all their principles”, “a phenomenon that must be addressed.”

In addition to mentioning the names of queer activists and calling them and bombarding them with slurs, which threatened their security and prompted many of her followers to send threatening and insulting messages  to these activists who are now suffering from the consequences of her speech, it must be said that she has involved other “influencers” in her counter-attack campaign against the queer community, such as the so-called “lapa” who is known for his hatred towards the queer community and his violent rhetoric against them.

Sharing this type of content with a large number of followers encourages and normalizes hate speech and calls for violence towards members of the queer community in Tunisia in particular, and in other countries in general. This type of discourse has been and continues to negatively affect the safety and well-being of the members of the queer community on a daily basis, whether it is mental, physical or psychological safety. It also promotes the stigmatization and dehumanization of target groups due to gender bias.

The organizations signed below warn of the consequences that may result from this campaign, especially in the absence of a legal framework that protects the affected people and the target groups at risk. On the contrary, it puts them at risk and makes them exposed to legal repercussions based on their sexual orientation and/or gender identities and/or expressions.

The signatory organizations also call on the social media platform “Instagram” to respect their community guidelines and standards which reject hate speech inciting to violence based on sexual orientations, gender identities and expressions and sexual characteristics, and to commit to taking the necessary and rapid steps to reduce its negative impact on the platform and in real life.

Logos of the organizations Access Now, Mawjoudin and Damj, which issued the demand to Instagram to block Lady Samara for her homophobic statements.

Mawjoudin and Damj provide you with a space for psychological, medical, legal and digital support and means to request support;  do not hesitate to ask for help.