Religious police on Sunday night arrested 10 young gay men in the holy city of Touba, Senegal, and threatened them with homosexuality charges. LGBT rights activists are seeking financial help to evacuate them to a neighboring country where allies will take care of them.

Religious police in Touba, Senegal, display illegal items they seized in a crackdown on objects and activities that are illegal in the holy city. Items on display include a pile of footballs (lower left) and an array of dresses on mannequins (upper left). They also arrested 10 gay residents of the city. (Image from a video by Seneweb TV on YouTube)

Six of the men were released after enduring violence at the hands of the police, according to a regional human rights organization.

To win their release, the six men had to agree to be brought before their families and confess that they had practiced homosexuality in Touba. The other four refused to do so for fear of retaliation.

Local human rights defenders today won the release of three more arrestees by paying their fines. That leaves one man still behind bars. The human rights organization does not have enough money to pay for his release.

The arrests were made by the Safiyatoul Amal religious militia in Touba in connection with a ceremony on Monday marking the opening of the militia’s new headquarters.

At that ceremony, the police displayed people and objects they had seized in a crackdown on activities that are illegal in the holy city: 2,641 footballs (soccer balls), 2,255 dresses and lingerie, 55 drums, 3,164 tobacco packets, 40 machetes, 4 bongos and 30 radios, along with the 10 gay men, 16 prostitutes and 18 people practicing native religions. The items were confiscated in the same crackdown, but were not owned by the 10 gay men. 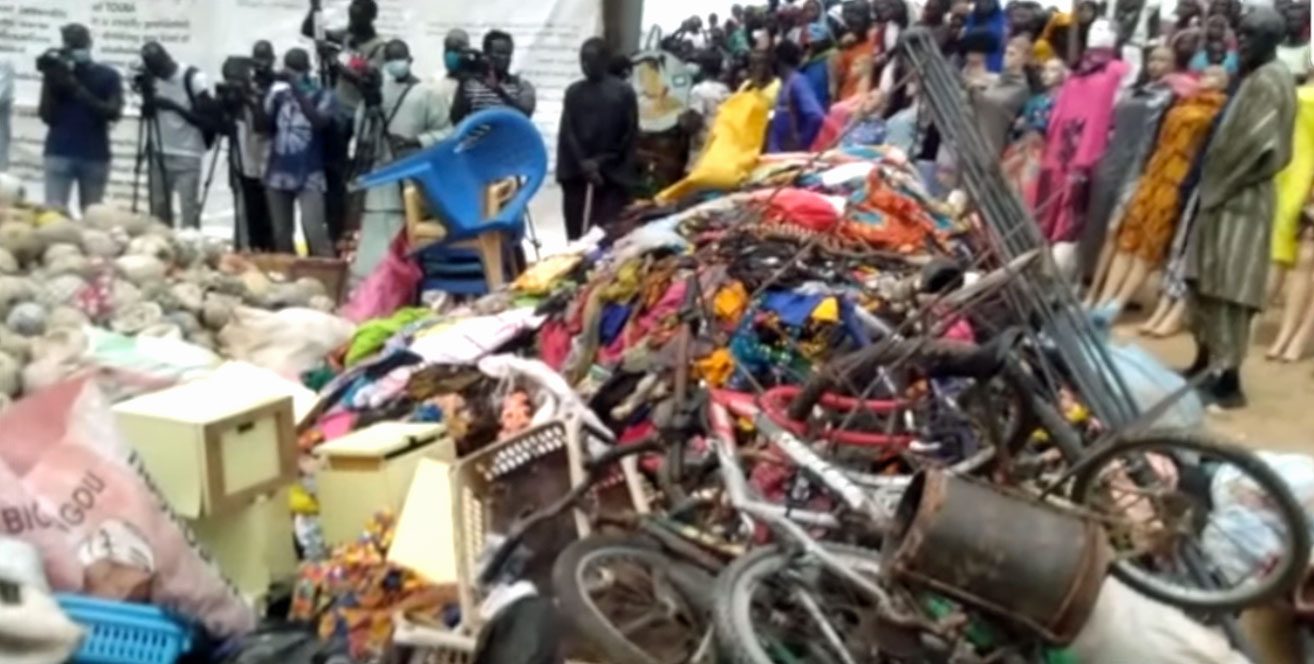 Pile of confiscated items, including bicycles, displayed Monday by religious police in Touba, Senegal. (Image from a video by Seneweb TV on YouTube)

Touba, the second-largest city in Senegal, is considered holy by followers of Mouridism, a Sufi Islamic movement. Touba is the burial place of Shaikh Ahmadou Bàmba Mbàcke, the founder of Mouridism.

The Safiyatoul Amal religious militia uses a network of informers to locate homosexuals and often entraps men on the Internet, a local LGBTQ rights activist said.

LGBTQ activists have been told that, if the remaining prisoner’s fines are not paid, he will be referred to the prosecutor to face charges of practicing homosexuality in the holy city, associating with wrongdoers and practicing prostitution without a health card.

Earlier this year, six young people have already been sentenced for acts against nature.

The local human rights organization maintains a refuge for victims of anti-LGBT persecution and violence. The nine released men are currently there, hoping they can leave the country for a location abroad where preparations have been made to receive them.

A total of 840 euros is needed to evacuate and take care of the men according to a local activist.

From 2018 to 2020, his human rights association has evacuated 47 victims out of the Touba region for their safety, he said.

Correction: The original version of this article stated incorrectly that, outside Touba, Senegal does not have a law against homosexuality.