To avoid homosexuality charges, a young Nigerian man was hauled before a Nigerian court last month and forced to sign an affidavit renouncing homosexuality.

The man, name withheld, had been arraigned by police after he was  accused of being involved in a homosexual act. To avoid homosexuality charges that could have led to a 14-year prison term, he signed the court document renouncing homosexuality on Aug. 3 in Benin City, Edo State, Nigeria.

Homosexuality has remained a contentious subject in Nigeria and most religious groups brand it a corrupting Western import.  LGBT Nigerians are considered deviants and are subjected to multifaceted forms of social, economic, and political discrimination. 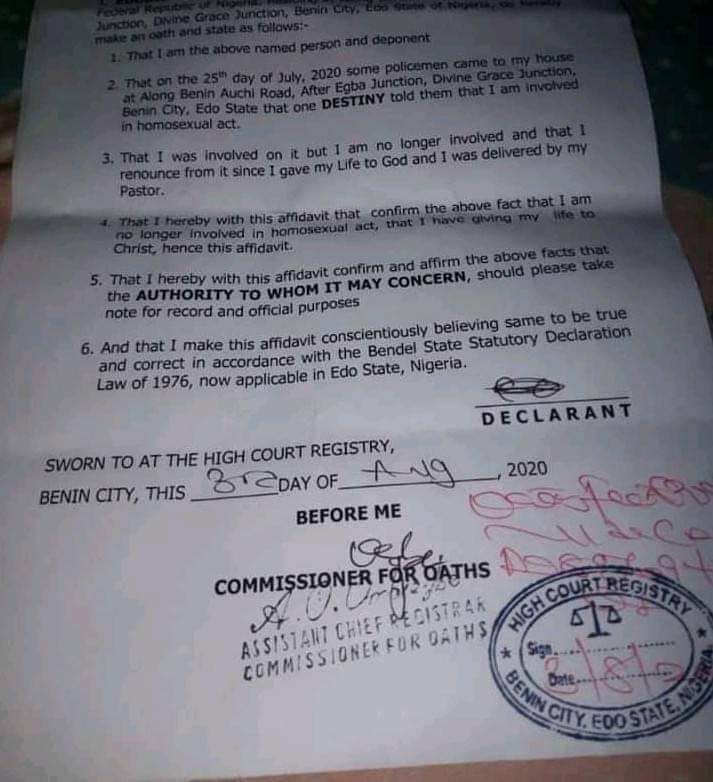 In the affidavit, the man stated under oath “that I was involved in [homosexuality] but I am no longer involved and that I renounce from it since I gave my life to God and I was delivered by my pastor.”  The document continued, “I hereby with this affidavit confirm the above fact that I am no longer involved in a homosexual act, that I have given my life to Christ, hence this affidavit.”

This case is only a tip of the iceberg of the discrimination that LGBT persons face in Nigerian by law enforcement agencies and by the judiciary, which is supposed to be the protector of the citizens’ rights.

It is appalling that, with all the awareness going on worldwide about sexuality and the need to accept those who were born different, most Nigerians still cling to the belief that LGBT persons are “psychologically sick” or “possessed by an evil spirit”, as religious fanatics would say. Hence, the need to subject them to forced rehabilitation, for instance, making them renounce their sexuality by swearing an oath and signing an affidavit. Anti-LGBT “deliverance sessions” by pastors often involve some crude methods like bathing in a river.