Imprisoned LGBT community members in Uganda await transportation back home from Kitalya Prison after being released on May 29 — 50 days after their arrest. (Photo courtesy of HRAPF)

The criminal charges, filed at the prompting of the gay-friendly legal support group HRAPF (Human Rights Awareness and Promotion Forum), are connected to the arrest of 20 men at an LGBT homeless shelter in March and their imprisonment for 50 days.

Kiyimba had been summoned to the court session but did not attend either on Sept. 23 or at the previous hearing on Aug. 26.

Woniala, who had been absent on Aug. 26, did attend this week.

The defense revealed that it will focus on evidence that detainees were tortured while in prison. A lawyer from the Attorney General’s office represented both the Attorney General and Woniala, although Woniala has been charged as an individual rather than as a Ugandan official, HRAPF noted. That lawyer presented requests to cross-examine a prisoner who was burned in prison and the doctor who examined the prisoners’ wounds after they were released.

“Basically, they are going for the main affidavits that speak to torture in the prison,” said Adrian Jjuuko, executive director of HRAPF.

Those cross-examinations were scheduled for Dec. 9.

The Attorney General’s lawyer also raised a technical objection to the decision by Justice Michael Elubu that held the state liable in damages for not allowing fair hearings and legal representation for the arrested men during the Covid-19 lockdown. That issue will be the subject of an additional court hearing that will be scheduled in October.

This is Juuko’s announcement about the Sept. 23 court session: 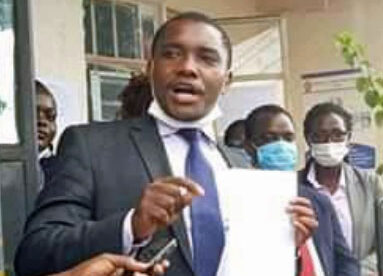 Today the case of Mukiibi Henry and 20 Others Vs Hajji Abdul Kiyimba, PO Philimon Woniala, Kyengera Town Council and Attorney General, High Court Miscellaneous Cause No.179 of 2020, came up for hearing before Justice Micheal Elubu. The case was filed on 21st July 2020, challenging the acts of torture, cruel, inhuman and degrading treatment that were perpetrated against 20 LGBT youths that were living in a shelter run by Children of the Sun Foundation (COSF)

All the other respondents were represented except for Hajji Abdul Kiyimba who did not show up in Court, and was not represented despite the fact that the Court process was duly served on him. The Judge ruled that the session would proceed without him.

Five out of the twenty COSF members who are applicants in the case were able to make it to Court.

When we reached court, the lawyer representing the Attorney General served us with several documents, one of which was a letter requesting the Court to allow them to cross examine 12 of the 21 Applicants on their affidavits. The 12 include myself and the main petitioner, COSF Executive Director, Mukiibi Henry, as well as the applicant who was burnt and the one who was released last, and the doctor who examined their wounds after they came out of prison. Basically, they are going for the main affidavits that speak to torture in the prison.

The lawyer also served us with an application to set aside the judgment of Justice Michael Elubu which granted us access to the 20 and held the state liable in damages for the violation of the non derogable right to a fair hearing. Their argument for setting this judgment aside is that the State Attorney who was assigned to the case arrived late due to COVID-19 related travel restrictions and so could not be there for the hearing. This new matter will be heard in October.

As such, we were not able to proceed to the hearing, and asked the judge to allow us time to organise the 12 persons to be cross examined. We also asked that the cross-examination happens in camera (without the press or public in the courtroom) to ensure privacy of the applicants. The Attorney General did not object to this, and our prayer was allowed.

The Attorney General also made objections to the some of the affidavits as containing hearsay evidence, and the Judge ruled that all these matters should be included in the final submissions.

The hearing was thus adjourned to 9th December 2020 at 9am for cross examination of the 12.