Journalists and social media writers need to do a better job of reporting accurately and consistently about LGBT Ugandans. That was the call made by Vincent Kyabayinze, the director of East African Visual Artists (EAVA), during a talk to journalists, bloggers and social media activists who participated in a two-day media training held recently in Kampala. 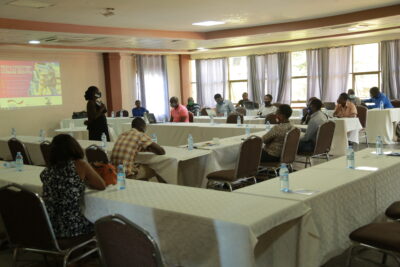 The training session was the first organised by EAVA with support from the German-Ugandan development organization GIZ under the theme: “Media for Equality – Enhancing non-discriminatory representation of LGBT in Uganda”.

In his remarks, Kyabayinze said that media can be a powerful tool in the fight for human rights and justice if media practitioners report without bias and prejudices.

“Accurate media coverage of LGBT persons to make their voices heard is just as important and fundamental as it is for any other persons or communities” he said.

He expressed concern over the continued negative and inaccurate reporting about LGBT persons across media platforms, saying that the East African Visual Artists (EAVA) as an organisation has embarked on an initiative to train media practitioners about LGBT rights and to remind them of journalism ethics, including the right to be heard.

“We realized that most of the negative reporting on LGBT persons is largely driven by either prejudices, lack of understanding, or a lack of capacity to access information on human sexuality on the side of journalists” Kyabayinze noted, adding that; most journalists or media houses have limited or no capacities to document and report on human rights violations faced by LGBT persons as well as the great work done by LGBT persons as Ugandans. 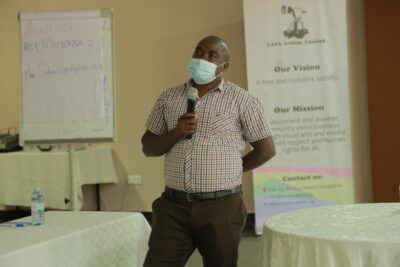 Kikonyogo Kivumbi, the executive director of the Uganda Health and Science Press Association, was one of the facilitators at the  training session. (Kivumbi is also a correspondent for this news site.)

In his submission, Kivumbi lauded EAVA for organizing the media training, which he said was long overdue. He also commended GIZ (German International Cooperation) and the Germany people for its financial support.

On the LGBT community in Uganda, Kivumbi, who is also an LGBT rights advocate, said that the rights and freedoms of LGBT persons in Uganda are repeatedly violated by state agencies, service providers, and society in general. Despite these widespread rights violations against LGBT persons, hardly any of them make it into the news, he said.

“Stigmatizing attitudes towards LGBT are widespread in Ugandan society. This also influences the mindset of journalists and there is a clear bias leading to stories about LGBT being practically absent from mainstream media,” Kivumbi said. 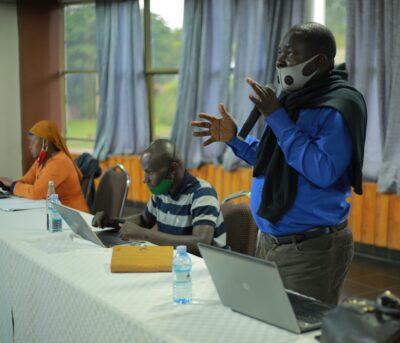 He noted that, when LGBT issues are covered, it is mostly done with a negative overtone, which reinforces already-existing stereotypes.
Umar Weswala, an independent blogger and the managing editor of The Community Agenda, was one of the media training participants.

His comment was that local journalists know little about LGBT persons or the legal framework that affects them in Uganda.

“These misconceptions cause factually wrong media reporting of stories concerning LGBT persons, which leave the Ugandan community with no useful information about the situation and rights of LGBT in the country,” he said.

Kyabayinze assured participants that more such events would be held in the future, which he said would empower journalists with skills, information and resources they need to report “without fear or favour.” 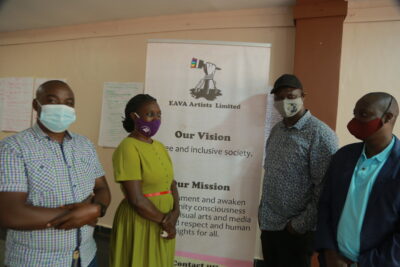 EAVA director Vincent Kyabayinze with some of the participants during the meeting.