Ugandan human rights activists are trying to come to grips with the declaration that President Yoweri Museveni easily won re-election last week after a bloody campaign that included him claiming that homosexuals were backing his opponent. 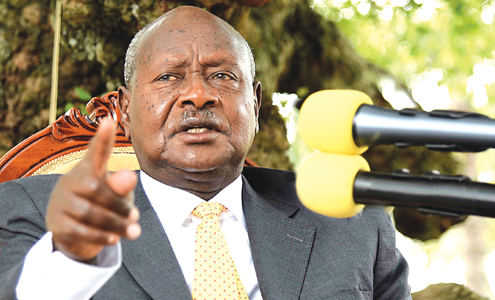 The post-election mood among activists was captured by the headline “Fear and Resignation in Uganda After Disputed Election Results”.

Africa Elections Watch, a coalition of civil society groups, said the Jan. 14 vote did not “meet the threshold of a democratic, free, fair, transparent and credible electoral process”. The organization had 3,000 observers watching over the election.

Bobi Wine tweeted this photo today with the caption “Day Six under house arrest and we’re still stuck with an 18 months old baby who had paid a visit to her auntie (my wife ) be4 we were raided & besieged. The Dad has been denied access to her. We have run out of food and milk. No one is allowed to leave or come into our compound.”

In the wake of the election, Wine was confined to his home, which was guarded by security forces.

Wine said he was not being allowed to leave his house, could not see visitors and was “worried about my life and the life of my wife”.

U.S. Ambassador Natalie E. Brown unsuccessfully tried to visit Wine today — an action that the Ugandan regime claimed was an attempt to subvert the election results.

Internet access was suspended from Jan. 13 to 18. When it was restored, activists shared claims of election fraud and rumors that Wine would be killed.