At Kakuma Camp, Kenya offers to guard LGBTQ+ refugees, but …

Officials of Kenya’s refugee agency promised to deploy guards to protect LGBTQ+ refugees at Kakuma Refugee Camp after a meeting on Feb. 19 at which refugees described “constant violent attacks” they have suffered. But a spokesman for the refugees said that no guards had yet shown up. 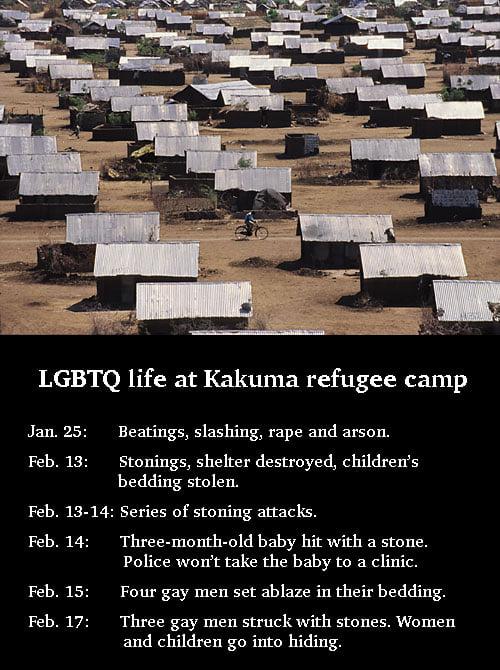 LGBTQ+ refugees at Kakuma Camp listed these violent attacks they have recently suffered.

Participants at the meeting included LGBTQ refugees and a collective of human rights organizations advocating on behalf of the refugees in coordination with the UN Refugee Agency (UNHCR).

The advocacy organizations issued this public statement on Feb. 26:

Logo of the Office of the U.N. High Commissioner for Refugees.

On February 19, 2021, the UN Refugee Agency (UNHCR) initiated and hosted a dialogue at the Danish Refugee Council. In attendance were; LGBTQ+ refugees in Kakuma Refugee Camp and the Refugee Affairs Secretariat (RAS), a department under the Kenyan Government Ministry of Interior and Coordination of National Government, in charge of the management and protection of refugees and asylum seekers in Kenya. At the meeting that was dubbed “a dialogue”, LGBTQ+ refugees were expectant of immediate solutions to their challenge of violence.

“The meeting lasted over two hours and was mainly about informing UNHCR and partners of the horrors that we are going through. While they did not guarantee our protection as most people had honestly hoped, they listened attentively and promised to come back to us ‘soon’. We had hoped for a display of urgency from them in view of the constant violent attacks that we experience”, reported Gilbert Kagarura, Spokesperson for Block 13, Kakuma Refugee Camp.

As a collective of human rights organizations; Pan Africa ILGA, Just Associates, Global Interfaith Network, Triangle Project, Center for Minority Rights and Strategic Litigation and PEMA Kenya, we are thankful to RAS for attempting to provide security to Block 13, a couple of days after this meeting. The refugees have reported that on February 21, RAS informed them that they would be deploying 25 community guards, from a security group called Community Peace and Protection Team (CPPT), who are made up of refugees, mainly from South Sudan, to patrol Block 13 and other LGBTQ+ refugee dwelling places. A few guards were presented to the leaders but they left shortly after, with a commitment that they would return later. However, the refugees report that they have not seen any guards patrolling the area since then.

Since 2014, LGBTQ+ refugees have, continuously, experienced innumerable violent attacks from homophobic and transphobic refugees in Kakuma Refugee Camp. 2021 has already registered fresh brutal attacks on LGBTQ+ refugees at Block 13, including: assault of an infant refugee, rape, stoning and beatings. On the night of February 15,2021, four gay men were set ablaze in their bedding as they slept in the open yard where they have no shelter. Three were rushed to hospital, seriously burned. This came at the end of a weekend of back-to-back attacks, where LGBT+ refugees were surrounded and stoned for several hours two days before the fire attack.

We continue to call on UNHCR and RAS to urgently offer immediate protection to members LGBTQ+ refugees at Block 13 in Kakuma Refugee Camp. We have proposed moving the targeted Block 13 to a relatively safe facility within the camp; the largely vacant, fenced and guarded transit center, a few meters from Block 13 would be a good place to start, in the immediate term.

We further call upon UNHCR and RAS to publicly condemn this unchecked violence and any other forms of abuse and discrimination against LGBTQ+ refugees in Kakuma Refugee Camp and to bring all perpetrators of these crimes to book.