The incident began with a sexual encounter between two men, Roger and Philip (pseudonyms), in the city of Bafoussam.

Before they met for sex, Philip had agreed to pay Roger 2,000 CFA francs (about US $3.50) for intercourse. But when the encounter was through, Philip didn’t have the money he had promised.

Instead, he gave his telephone to Roger as collateral. A few days later, he asked to get his phone back, but Roger refused. Philip went to the police to file a complaint.

During their investigation, police learned the origins of the dispute. They also learned that Roger and Philip each received anti-AIDS services from Colibri. 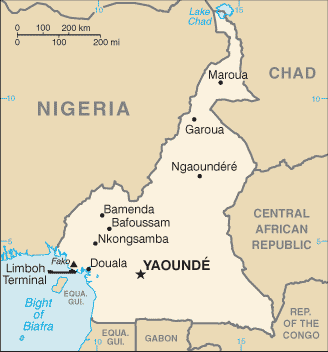 Bafoussam is in western Cameroon near the Nigerian border. (Map courtesy of Wikipedia)

Police raided the offices of Colibri to seek other people with a similar sexual orientation.

The raid occurred on Feb. 24 during an anti-AIDS event sponsored by Care Cameroon.

During interrogations at the police station, police beat two Colibri staff members on the soles of their feet, saying that they had resisted police orders.

Activists contacted RAIL, a network of prominent citizens organized by the Camfaids and Alternatives-Cameroon LGBTI advocacy organizations who have agreed to intervene in cases of human rights abuses targeting sexual minorities and other vulnerable populations in Cameroon.

On Feb. 25, RAIL members persuaded the police in Bafoussam to release 11 of the 13 arrestees.

Under Cameroonian law, homosexual intercourse is punishable by up to five years in prison.