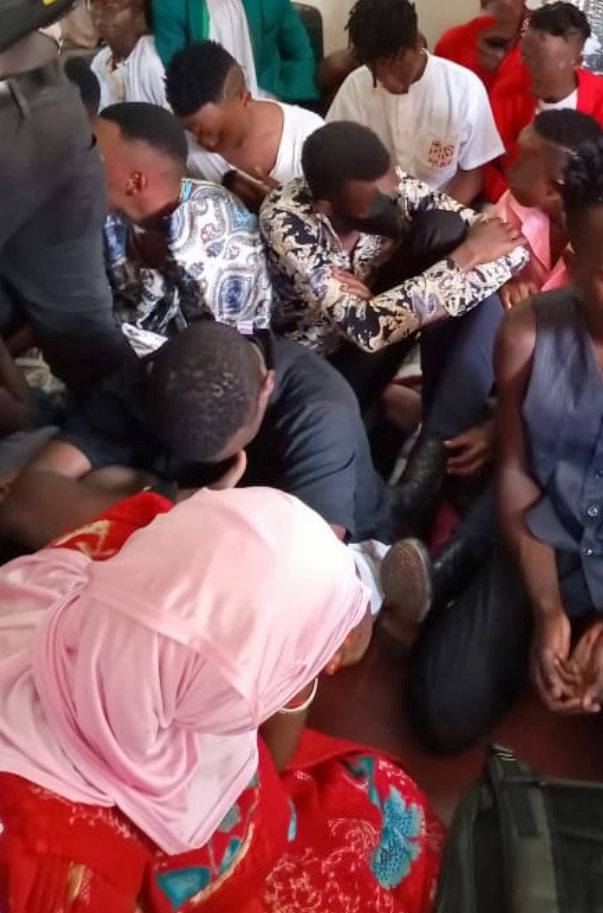 Arrestees at the Happy Family youth shelter were forced to sit on the floor. (Photo courtesy of Nile Post) (Arrestees’ faces are blurred for their safety.)

Responding to a report of an alleged gay wedding under way yesterday, police in Kampala, Uganda, raided a party at the Happy Family youth shelter and arrested 44 party-goers.

Charges of violating Covid-19 regulations were filed against 42 of them, according to a statement by the LGBT-friendly legal services organization HRAPF, the Human Rights Awareness and Promotion Forum. The formal charge was “doing a negligent act likely to spread infection of disease contrary to section 171 of the Penal Code Act.”

All 42 pleaded not guilty and were remanded to police custody to await a bail hearing, set for June 2.

The arrests were part of a “a worrying trend of mass arrests of LGBT persons whenever there is a gathering of any kind,” HRAPF stated.

A police spokesperson quoted in the Nile Post said that at the shelter “a group of 38 adult males and 6 females were found conducting a ceremony at around 1pm that looked to be a wedding. All the men had make up and some were dressed as female in dresses and wigs.”

“At the same functions gifts were recovered, these included suitcases, a tv, assorted gifts like sugar, salt, pineapples and many other gifts normally given at traditional functions.”

The Nile Post added, “Kampala police spokesperson noted that used and unused condoms were recovered at the scene whereas the suspects were not observing Covid [protection procedures] like social distancing and wearing of masks.”

HRAPF and Sexual Minorities Uganda (SMUG) were preparing sureties and bail money in advance of the June 2 court hearing.

These are excerpts from HRAPF’s statement about the events:

On Monday the 31st of May 2021, police officers raided the shelter of Happy Family Youth Uganda Limited located in Nansana Municipality, Wakiso District. At the time of the raid, there was a party going on. They arrested a total of 44 persons who were attending the party and detained them at Nansana Police Station and at Lubigi Police Post.

Statements made by the KMP Spokesperson Luke Owoyesigire in the media suggest that the raid was prompted by reports from locals that a gay wedding was taking place at that venue.

42 of those arrested were arraigned before the Nansana Magistrates Court today (Tuesday 1st June 2021) at about 5.30pm. The official charge is doing a negligent act likely to spread infection of disease contrary to section 171 of the Penal Code Act. They all pleaded Not Guilty and were remanded. Because it was late in the evening, they were not allowed to apply for bail. The bail hearing has instead been scheduled for tomorrow 2nd June at 9am. All are being held overnight at the police station pending the bail hearing.

… We are hopeful that [the 42 arrestees] will be able to come out tomorrow if we do secure bail. The lawyers are ready and we think all should go well tomorrow.

The detainees will however need emergency support including food and accommodation when they get released and all these need to be arranged. As such we encourage all partners able to support this process to reach out to SMUG in order to coordinate efforts.

This is the latest in a worrying trend of mass arrests of LGBT persons whenever there is a gathering of any kind within the Kampala/Wakiso area. Impunity continues to escalate as well as acts of torture and violence against LGBT persons – including anal examinations. The authorities seem not to charge such persons with carnal knowledge against the order of nature perhaps due to the absence of evidence to support such a charge but use charges such as being a common nuisance and now the COVID-19 related restrictions to persecute LGBT persons. With the Sexual Offences Bill recently passed, this may be a harbinger of worse things to come.