A court in Ghana dismissed the case against 21 LGBT+ activists, ruling there was not enough evidence to prove they had gathered unlawfully on May 20, according to the Reuters news service.

The 21, who were repeatedly denied bail, were held for three weeks without a trial. Their release on June 11 came only many local and international organizations called for an end to their unwarranted detention. 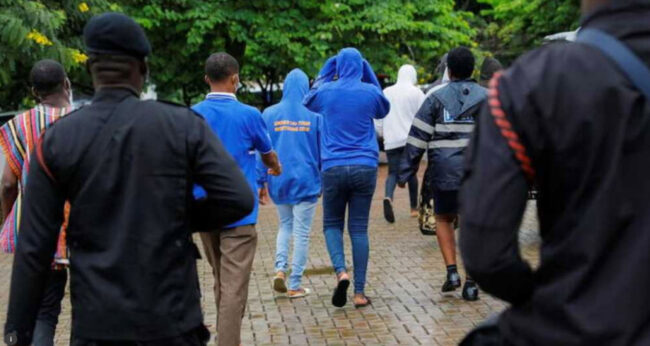 People who were detained by police on suspicion of promoting an LGBT+ agenda at an unlawful assembly are escorted by police officers out the court after their bail hearing at the Ho court in Ho, Volta Region-Ghana on June 4, 2021. (Francis Kokoroko photo courtesy of Reuters) 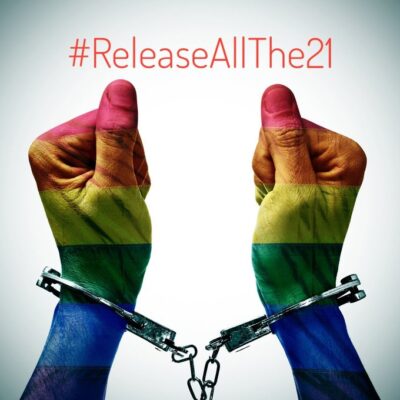 An online campaign using the hashtag
“#ReleaseAllThe21” appealed for the release of the 21 people arrested in Ho, Ghana, in May for attending a human rights training session.

HO, Ghana — A court in Ghana dismissed a case against 21 Lesbian Gay Bisexual and Transgender (LGBT+) activists on [Aug. 5], ruling there was not enough evidence to prove they had gathered unlawfully, a prosecutor in the case said.

“What this means is that they cannot be brought back to court on the same charges. So they have been freed,” Chief Superintendent Akologo Yakubu Ayamga told Reuters.

The 16 women and five men were arrested at a hotel in the southeastern city of Ho in May. Police said they had gathered illegally to advocate LGBT+ activities with books and flyers with titles including, “Coming out” and “All about Trans”.

LGBT+ people face widespread persecution in the West African nation where gay sex is punishable with up to three years imprisonment.

But promoting gay rights is not illegal in Ghana and the organisation LGBT+ Rights Ghana had said the arrests were unlawful. The organisation said the activists, who were granted bail in June, had met for a workshop on how to document and report human rights violations.

Ghana has not prosecuted anyone for same-sex relations in years, but LGBT+ people face frequent abuse and discrimination, including blackmail and attacks, human rights researchers say.