Donations from generous readers have funded the first of several planned deliveries of food and hygiene items to LGBT prisoners in Yaoundé, Cameroon. Rejected by their families and imprisoned solely for homosexuality, the prisoners ordinarily must get by with just one scanty meal per day.

Groceries purchased and delivered on June 15 to LGBT prisoners in Cameroon by the advocacy group Camfaids. (Photo courtesy of Camfaids).

The deliveries were made by the LGBTI advocacy group Camfaids, which has partnered with this news site and with the St. Paul’s Foundation in Project Not Alone / Pas Seul 2021.  That project has been raising funds for food deliveries, legal defense and to pay the fines of LGBT prisoners, which allows them to be released early.

Four of the 11 LGBT prisoners have already been released because the project paid their fines. Enough money has been raised to pay the fines of four other prisoners who are not yet eligible for release. Their time in prison will be cut by about four months.

This week, an attorney from the project’s partner organization Defenders Without Borders (DSF) submitted requests for three LGBT detainees to be released on bail pending their trials.

DSF attorneys are working pro-bono, with their expenses paid by readers’ donations to Project Not Alone / Pas Seul 2021. Those three detainees have been held in prison for more than a year without trial.

Each of them likely will need to provide cash bail of 105,000 CFA francs (about $190) before they are released.

If you want to contribute to cover their bail, you can do so here:

The project is still slightly short of its original fundraising goal, but had not budgeted for bail.

(Please keep in mind that the St. Paul’s Foundation plans a fall fundraiser, which will raise money to allow its advocacy journalists to keep working in countries where homosexuality is illegal. Their work lays the groundwork for initiatives such as Project Not Alone / Pas Seul 2021.) 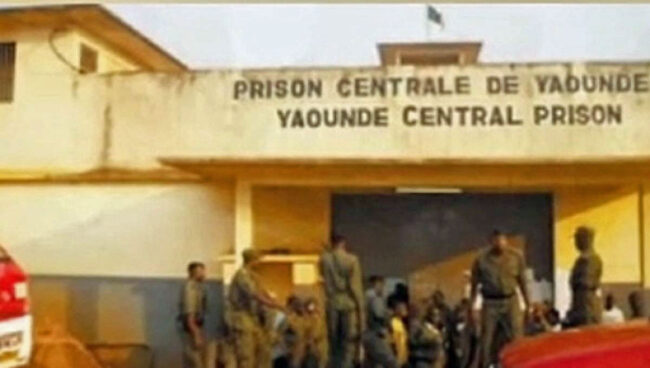 This is the report from Camfaids on their visit to the main prison and the central prison of Yaoundé, which are both in the Kondengui section of the city. The report is translated from the original French:

Report of the visit to Kondengui prisons

On Tuesday, June 15, 2021, two food visits were held at the main prison and the central prison of Yaoundé. The visits were undertaken by a Camfaids team to the detainees in the 2 prisons mentioned above.

Beneficiaries: 11 prisoners
[Actually only 9, because 2 had been released before the Camfaids team arrived]

During the visit to Yaoundé Central Prison, the 7 prisoners (transgender, lesbian and gay) were served, even though we did not see all 7 prisoners due to disease. B.A. was suffering from sore feet. His package was given to F.M. who would take it to him.

The other inmates are doing well, but they suffer from other prisoners insulting and intimidating them.

The two lesbians in the process of liberation plan to stay with a grandmother for a while and think about relaunching commercial activities or seeking to leave the country for the West.

F.M. hopes to regain his freedom and then learn car mechanics. For the others, they still have no idea what activities they will undertake upon release from prison.

They note the absence of family visits and are traumatized when they mention it. They greatly thank the Saint Paul Foundation, which supports them through donors, and hope to meet [foundation president] Colin Stewart physically if he comes to Cameroon.

For the 4 prisoners at the main prison in Yaoundé [a separate prison next to Yaoundé Central Prison], they are treated much better compared to those in the central prison because the number of people detained there is lower.

All 4 are thinking of training in hospitality when they leave prison, even if they do not yet know where they will live.

For those who are not yet sentenced like N. and A, both are exasperated and traumatized by seeing the news of the 5-year sentence given to Shakiro and Patricia. [https://76crimes.com/2021/05/11/internet-trans-celebrity-shakiro-sentenced-to-5-years-in-prison/]

– For the prisoners of the Yaoundé central prison, they need blankets against the cold in this season when the climate is difficult in Cameroon
– The two lesbians [now released] pointed out that they need sanitary napkins. The Camfaids team forgot to buy those when shopping. 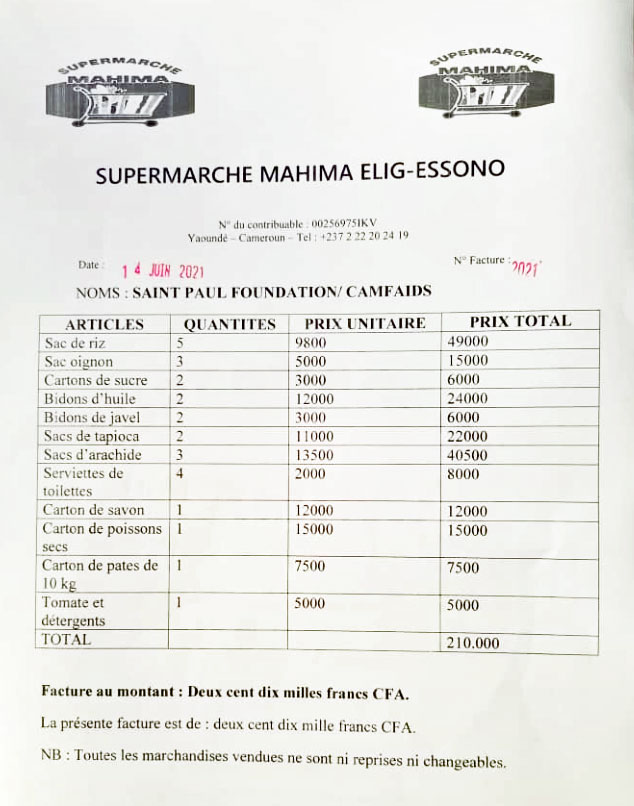 Camfaids purchased tapioca, rice, oil, tomato, sugar, antiseptic soap, detergent, pasta, onions and more for the prisoners at the Mamima Elig-Essono supermarket and submitted this receipt with their report.

Thanks again to donors for their generous support.