A series of high-profile assaults and arrests of LGBTQ activists in Tunisia is drawing attention to the pervasiveness of police abuse, torture, and reprisals against complainants in the North African country. 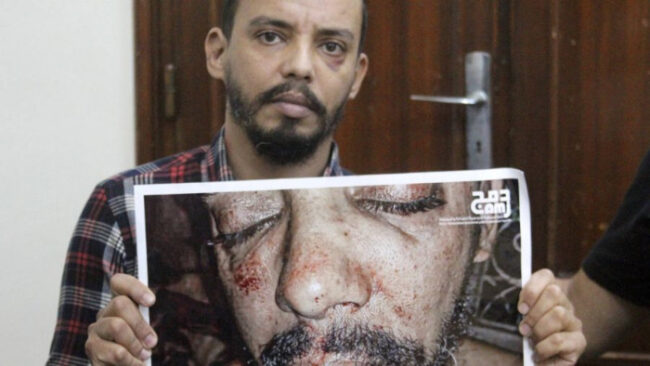 On October 21, 2021, prominent LGBTQ activist Badr Baabou was brutally assaulted in downtown Tunis by two men, one wearing a police uniform, who left him bruised and bloodied, and who robbed him of his phone, wallet, and laptop. While beating and kicking him, the assailants allegedly said the assault was a punishment for his attempts to file complaints against police officers for previous mistreatment.

Baabou is a well-known human rights defender, having co-founded the Tunisian Association for Justice and Equality (known by its Arabic acronym, Damj) and is co-chair of the regional LGBTI+ HIV/AIDS advocacy organization M-Coalition.

Gay sex is illegal under Article 230 of the Tunisian Penal Code and carries a maximum sentence of three years. LGBTQ Tunisians may also be targeted by police for alleged violations of Article 226, which forbids “outrages against public decency.”

Human Rights Watch researcher Rasha Younes says in a report by the Associated Press that laws that criminalize LGBTQ people encourage police violence against queer Tunisians, which is growing more public and brazen.

“Officers feel empowered to enact whatever form of violence they want, knowing that they will get away with it because the law is on their side,” she says.

In fact, Baabou says he has been assaulted many times since he founded his first LGBTQ advocacy organization in 2002. He reported in March that he was attacked by a gang of four men after leaving a bar, and in 2016, he was beaten so severely that he lost seven teeth.

But Baabou says the severity of the most recent attack was particularly shocking.

“This was not the first time that I had been attacked by a policeman, but I was really surprised. The attack was horrifying,” Baabou says. “They aimed for my head… at a moment they stood on my neck.”

Baabou has filed a criminal complaint regarding the latest attack and police have launched an internal investigation to identify the assailants, a development that his lawyer Hammadi Henchiri calls “a first” for the police.

Rights groups say that Tunisia’s powerful police unions – a recent innovation only allowed since the 2011 revolution that deposed dictator Zine El Abidine Ben Ali – enable and even encourage police misconduct by promoting a culture of criminalization of LGBTQ people.

Henchiri says he has seen a noticeable increase in severe police brutality, including in two similar cases he’s worked on.

“Usually the police are technicians of torture or abuse. They don’t leave fractures or bruises,” Henchiri, says.

Queer and human rights organizations are fighting the police with court complaints and campaigns to turn public opinion. Babou says that in the past year Damj has provided legal assistance to more than a hundred LGBT people at police stations cases. That’s a sharp increase from previous years, indicating both increased need and increased willingness on the part of victims to fight back.

Another prominent activist, Rania Amdouni, was forced to flee to France after being arrested for allegedly assaulting a police officer while she attempted to file a complaint for online harassment linked to the police union. She had been sentenced to six months in prison, but was released after 19 days when nongovernmental organizations and lawyers intervened on her behalf.

Amdouni tells the Associated Press that the harassment stems from her involvement in the months of anti-government protests that rocked the country in from January to July 2021. Police used drones to capture photos of LGBTQ activists at the protests and distributed them on Facebook pages associated with police unions, leading to widespread targeted online harassment.