For lesbians in Senegal, violence, rape, and poverty are constant threats

We spoke with Guadalupe, a 25-year-old Senegalese lesbian, to learn more about the violence that women, and particularly lesbian and queer women, face in that West African country. 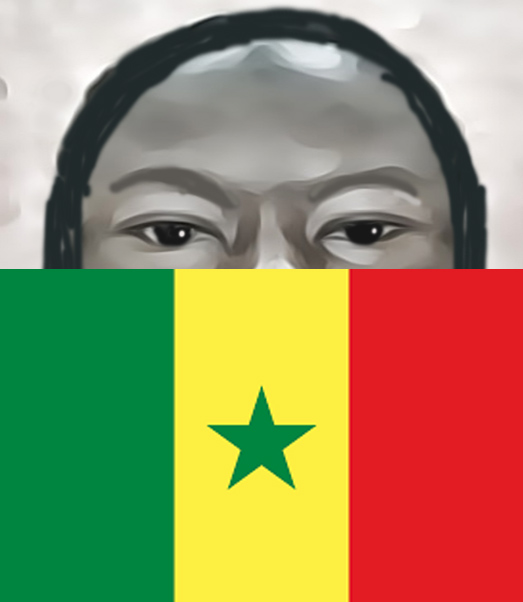 This image represents Guadalupe, her face obscured by the Senegalese flag.

To protect her safety, her name has been changed for this story.

What is your experience as a lesbian in Senegal?

Guadalupe: I live in the informal economy sector, like many young Senegalese people in precarious situations. To get by, I help people, I give a hand and I clean in the tourist areas of my country, before the economic activities start in the morning.

Several years ago, my family discovered that I was having an affair with another woman. I was still very young. Subsequently, in the weeks that followed, I was married without my knowledge and regularly underwent “corrective” and conjugal rapes that lasted at least two months, in order to make me change my love orientation.

I was even taken to see a Soninke marabout [a Muslim religious leader or chaplain] in the remote region of Matam, on the border with Mali and Mauritania, in order to be “disinvolved.” In reality, I was raped again after a ritual in which the marabout held a candle to my vagina while I was naked, and then began incantations in a glossy language.

Lesbophobic attacks on the public highway are not rare in Senegal, either. They are less viral and mediatized than the ambushes that target gays, but they are no less common. For example, last January I had the misfortune to converse in the street with another woman who identified me as an LGBTI rights activist. Her husband, who was probably listening to our discussion and who passed by, violently roughed me up and I was slightly injured.

Finally, for lesbian women like me who refuse marriage and who are repudiated by their entourage, we are left with a life of difficulties and financial and economic precariousness, in a country where there are already not many opportunities for young people like us. So, until yesterday, I lived in a house under construction with a mason and I led a day-to-day existence, where I could sleep in the street. Since Monday, I have been taken care of by the Collectif Free du Sénégal.

How do you see your future?

Guadalupe: In the past, I was able to benefit from a support in order to go to a country of the sub-region. It lasted a few months, but I did not stay there.

Today, I live in a coastal and urban region of my country, because there is more mixing here than elsewhere in Senegal: Europeans, Senegalese, Creoles from neighboring Portuguese-speaking countries, Catholics, Muslims.

Otherwise, I have kept some contacts with the feminist movements of Dakar, but the political and social context as well as the pressures of Jamra (Islamist movement) are very unfavorable to them.

LESBIANS, THE MOST VULNERABLE OF WOMEN

Erasing 76 Crimes also spoke with a development rights worker to learn more about the situation for women more broadly in Senegal. Because of threats to her safety, we are referring to her as Lucette (not her real name).

How do you see the role of violence against women in Senegalese society?

Lucette: Attacks are more and more publicized in Senegal. On the other hand, the penal response of the authorities is sometimes perplexing. On the whole, violence against women in Senegal is symbolic, legal, verbal and physical.

For example, three years ago, a man named Ousmane Mbengue called for the killing of women on social networks, under the guise of humor, after a series of feminicides that had frightened the country. In the end, he was only sentenced to six months in prison. So much for the judicial institution.

More recently, at the end of March 2022, the issue of abortion briefly came up again in the debates, after a woman in the region of Saint-Louis was killed by her companion because she refused to have a clandestine abortion at the risk of her life, even though in Senegal abortion is illegal, except in cases where the mother is endangered for therapeutic reasons, under article 35 of the medical code of ethics.

Finally, among women, lesbians are among the most vulnerable, because even in case of aggression, they do not benefit from any support from their relatives. On the contrary, it is often the latter who are the first to want to marry them by force.

Sign the Petition for an inclusive Senegal without discrimination

Individuals and organizations wishing to contact the Collectif Free du Sénégal can write to: [email protected]senegal.org.

Moïse Manoël-Florisse, the author of this article, is a native of Guadeloupe with a bachelor’s degree in geography from Paris 1 Panthéon-Sorbonne University and two master’s degrees (sustainable development management, sociology and social work). He is currently completing his Ph.D. at the University of the Antilles in Martinique with a focus on homophobia and neocolonialism in French Guiana and Suriname.