As Museveni wins peace prize, he wars against homosexuals

Ugandan President Yoweri Museveni waged verbal war on homosexuality on Aug. 2, even as he accepted an international peace prize. He demanded that the West demonstrate tolerance for Ugandan intolerance toward homosexuality. 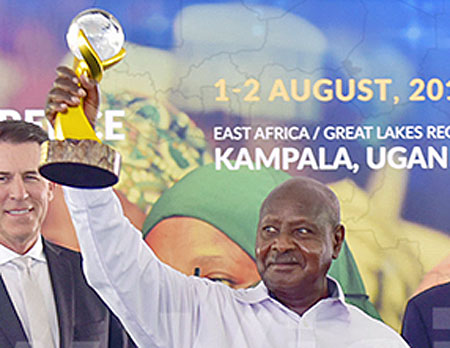 The honor to Museveni came from the Global Peace Foundation, which was founded by Korean-American entrepreneur Hyun Jin Preston Moon, the son of the late Rev. Sun Myung Moon, founder of the Unification Church.

President Yoweri Museveni has attacked the West for ‘imposing’ homosexuality and leaders of their choice on Africans, saying that this is an act of intolerance and lack of respect.

Museveni said for the Africans, sexuality is treated as a private matter but now the West is imposing its own values on the continent, ignoring the fact that as Africans they have an identity and a set of values that should be respected.

“Tolerance is something I find missing in the Middle East and even in Europe and it causes a lot of problems. On every issue, somebody wants to impose his views on other people. You come to the issue of homosexuality, they want to impose it on you,” said Museveni. …

“Africans here, we know a few people who are rumoured to be homosexuals, even in history we had some few being rumoured but you cannot stand up here and say ‘am a homosexual.’ People will not like it, but whenever we talk to our partners from other part of the world, and say that is a private matter, you leave it. They say no; they want to impose it on you that I should stand up and say; oyee, homosexuals oyee,” said Museveni.

Edwin Sesange, director of the London-based LGBTI-friendly African Equality Foundation, criticized Museveni for his remarks and the Global Peace Foundation for honoring a man who denies LGBTI Ugandans the right to peaceful lives.

Logo of the Global Peace Foundation

It is a shame to hear a president bashing LGBTI people while accepting a global peace award. This was a slap in the face of the Ugandan LGBTI community to award a person who does not believe we need peace like any other groups of people in the country.

I do not know the criterion used by the Global Peace foundation to award people, but I guess peace, justice, non-discrimination and fair treatment of LGBTI people is either on the bottom of the list or it doesn’t exist on their list at all.

But he also said that Africans should stop complaining about persecution by Western powers.

Loading...
Newer Post
Why is Zambian couple in jail? Because of King Henry VIII
Older Post
LGBTI activists at risk of burnout; what can we do?