Why is Zambian couple in jail? Because of King Henry VIII

“Is it not time we accepted that some people are gay and that no law will stop them from falling in love with people of the same gender?” asks Zambian native the Rev. Kapya Kaoma in response to the Aug. 3 conviction of two Zambian men for gay sex.

England’s King Henry VIII, whose property grab in 1553 made gay sex a crime rather than a sin. (Painting by Hans Holbein the Younger courtesy of BBC)

Kaoma, currently an Episcopal priest and human rights researcher in the United States, poses that question in a commentary published in the Lusaka Times. He strongly criticized the ruling by magistrate Ackson Mumba, calling it shameful, perilous and unjust.

Although many Zambians think of their nation’s law against gay sex as a protection for traditional African values, Kaoma pointed out that Zambia inherited the law from the British Empire. It traces back to a decision by English King Henry VIII to reclassify homosexual activity as a crime rather than as a sin. Henry did that so he could seize the property of monasteries by accusing monks of homosexuality.

In contrast, in many traditional African cultures, homosexuality was acceptable rather than scorned. See these two articles, for example:

The Lusaka Times deserves praise for publishing a commentary in favor of LGBTI rights. Most African publications tend to be blindly homophobic.

Zambian native District magistrate Ackson Mumba’s shameful conviction and committal to the High Court of Japhet Chataba and Stephen Sambo for the crime of “carnal knowledge against nature” (whatever it means) in Kapiri – as reported by Lusaka Times on August 4, 2018 was applauded by the ghost of the 16th century English King, Henry VIII. The couple now risks spending up to 15 years in prison for engaging in alleged same-gender sex.

As a human rights advocate, I believe consenting adults’ private sexual lives are not the business of the State, the church or the hotel/lodge owner. That the arrest took place in the room of the lodge after the owner called the police is in itself suggestive. For the lodge owner to call the police on the couple after checking into the room is a clear violation of the couple’s fundamental rights to privacy. If lodge and hotel staff peer into rooms after we check-in, then we are entering a very chancy era in our nation. Sadly, the learned Magistrate did not see the immorality and illegality of the lodge owner’s actions—setting a bad precedent for future blackmails of guests by the hotel/lodge staff. 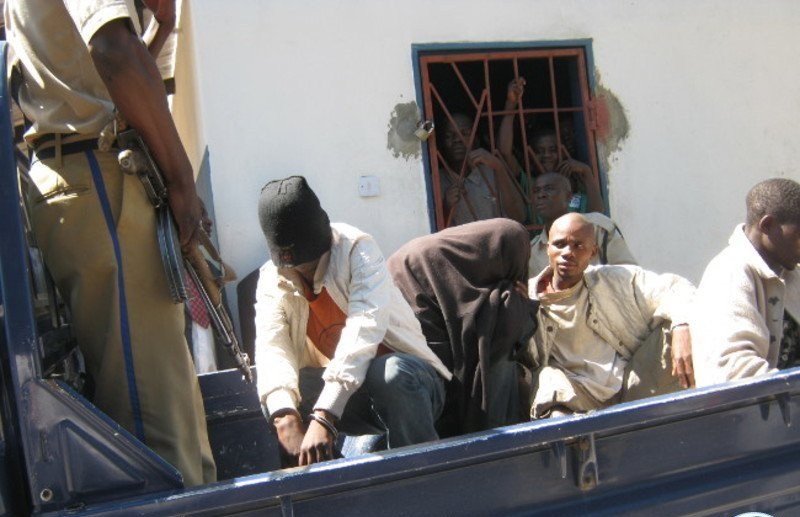 After their conviction in Zambia on Aug. 3 for gay sex, Japhet Chataba and Stephen Sambo are loaded into a pickup truck to be transported back to jail. (Photo courtesy of Lusaka Times)

In his ruling, Magistrate Mumba did not explain how the couple’s alleged sexual crime affected other people. Rather he cited Section 155 (a) of the Penal Code, and Chapter 87 of the Laws of Zambia and Statutory Instrument number 15 of 2015 Constitution. What he did not say is the origin of these laws—they are priced gifts of British colonialism. The law of “carnal knowledge” maybe coated with “Zambia,” but it originates from King Henry VIII, who decreed homosexuality a felony as opposed to a sin.

Religion has always differentiated between a sin and a crime. Many evangelicals view drinking beers, divorce and smoking as sinful, but these acts are not crimes. Despite the health risks associated with smoking and drinking, we do not arrest smokers or those who drink based on our evangelical religious convictions. In fact, if we locked up all drunkards, Magistrate Mumba, President Lungu, politicians and countless religious leaders are likely to rot in jail.

We may have religious reasons to object to homosexuality—but we are a secular nation with secular laws. Unless our nation is a theocracy—a state governed by religious dogma, it is within our democratic rights to choose what we do with our private lives as long as our choices do not harm other individuals. Japhet and Steven are adults, and what they do in private is none of the State’s, the lodge owner’s or my business. I am still to be convinced as to how one’s homosexuality affects my rights.

The Rev. Kapya Kaoma: “a clear violation of the couple’s fundamental rights to privacy” (Photo courtesy of Political Resource Associates)

Let us face it—prostitution is a crime in Zambia. Yet each passing night and day, in Zambia’s hotels and lodges, men buy sex from the streets. Are we suggesting arresting men who have solicited sex in hotel/lodge rooms based on the staff’s positions on prostitution? We are trading on perilous waters—something Magistrate Mumba’s ruling sanctions.

We must all understand the injustice of this shameful ruling. Stephen and Japhet are breadwinners for many other people—their imprisonment will surely ruin their lives, and affect countless family members. Is it not time we accepted that some people are gay and that no law will stop them from falling in love with people of the same gender? We can force gays into the shadows and lock them up, but the truth is – as long as our mothers continue to give birth, new gays will be born. It is on us to promote love and not injustice—as learned magistrate Mumba does. Our courts should be sentencing corrupt government officials to jail rather than gay persons.

I can only pray that the High Court will dismiss this shameful ruling!