Three men were arrested in Buea, Cameroon, after one of the three courted the younger brother of a local police officer.

Two of  three gay men arrested in Buea on Aug. 1 are on the staff of Colibri, a local LGBT advocacy association that promotes human rights and improved health for people living with HIV.

The three are Real, a peer educator for Colibri; Ric, a supervisor for Colibri; and Ben, a boyfriend of Real who lives in Buea. (These three names are all pseudonyms.)

Earlier this summer, Ben was wooing a young Limbe resident on Facebook, not knowing that the youth’s big brother was a police officer.  When the young man tired of Ben’s online attention, he told his brother what was going on.

The two brothers decided to entrap Ben.  Ben urged the young man to join him in Buea and sent him money to travel the 30 kilometers from Limbe to Buea. The young man then said that his national identity card was out of date and that he could not leave Limbe. Because of unrest in that English-speaking area of Cameroon, strict security measures are enforced there.

After Ben traveled to Limbe, the young man informed his big brother that Ben had arrived. Ben meanwhile called his boyfriend, Real, and invited him to join him in Limbe. He did, only to end up under arrest along with Ben.

They were taken to the police station in Buea, where Ben and Real acknowledged that they are gay. They told police that they had been together for three years and have sex regularly.  They even described who takes “a woman’s role” in the relationship. 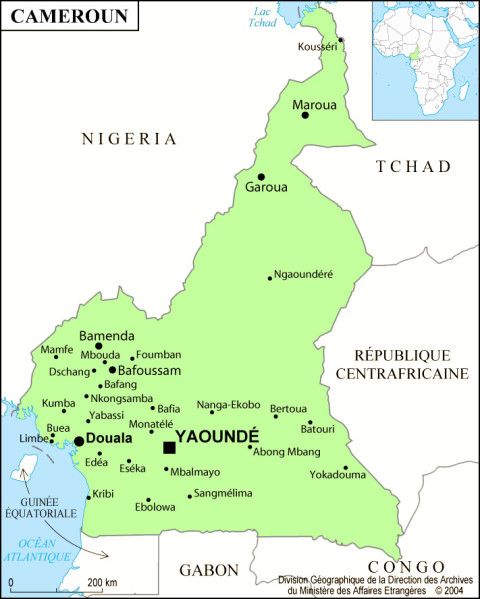 Buea is in south-west Cameroon, 30 kilometers north of Limbe.

The next day, Aug. 2, Colibri supervisor Ric went to the police station with two female colleagues to deliver medication to Real, who had a toothache.

At the police station, Ric too was arrested, but not for homosexuality. He was detained on a charge of supporting Ambazonians — separatist fighters in the English-speaking area of ​​Cameroon. His bail was set at 30,000 FCFA (about 46 euros).

For Ben and Real, after a lengthy discussion with the commander, he told them he would release them if they paid him 500,000 FCFA (about 765 euros). If they did not pay, the commander said, he would take them to court on homosexuality charges. Under Cameroonian law, homosexual activity is punishable by a prison sentence of six months to five years.

Ben’s family collected a sum of 200,000 FCFA (about 306 euros) to pay off the commander, but then found that they could not even get through to him by phone.

News of these events reached officials at Camnafaw, the Cameroon National Association for Family Welfare, which is the nation’s primary agency working in the area of ​​sexual and reproductive health, supported by the Global Fund.

Camnafaw dispatched an emissary to Buea. After discussion, Ric and Ben were released on bail. Real was also freed; the terms of his release are currently unknown. Ric was expelled from the family home and is currently homeless.