Kanye and Kim missed their chance to make a difference

Outspoken rapper Kanye West once urged the hip-hop community to switch off its homophobia, but on Monday he missed the chance to do the same to Ugandan President Yoweri Museveni. So did his wife, reality TV star Kim Kardashian West. 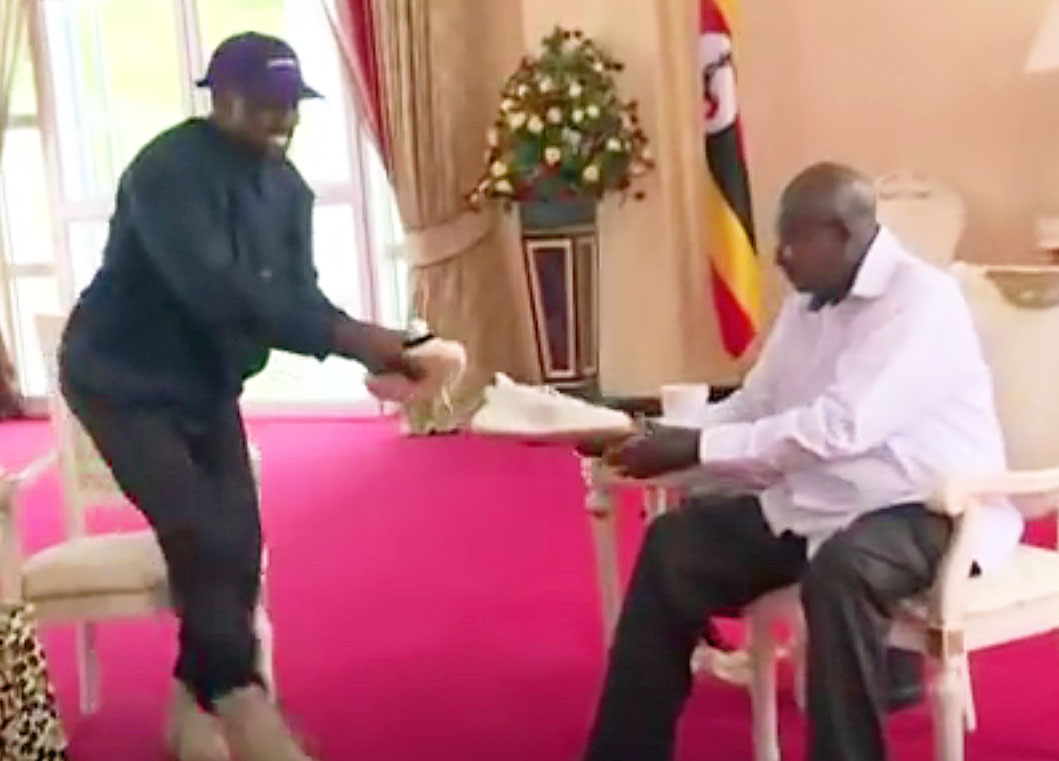 The celebrity power couple, who are in Uganda while West records a music video, met with Museveni on Oct. 15. They could have spoken up, but neither of the American visitors urged the Ugandan strongman to put a stop to anti-gay discrimination. That was a lapse from the pro-LGBT-rights positions West and Kardashian have taken in the past.

In a 2005 interview, West came to terms with his own youthful homophobia and urged his followers to welcome LGBT people and to stop using the word “gay” as an insult.

“That’s really discrimination. That’s what they used to do to black people. I’m just trying to tell people to stop all that,” he said.

This year, West gained new notoriety as a supporter of U.S. President Donald Trump, but he assured fans that it “don’t mean I don’t believe in gay marriage.” 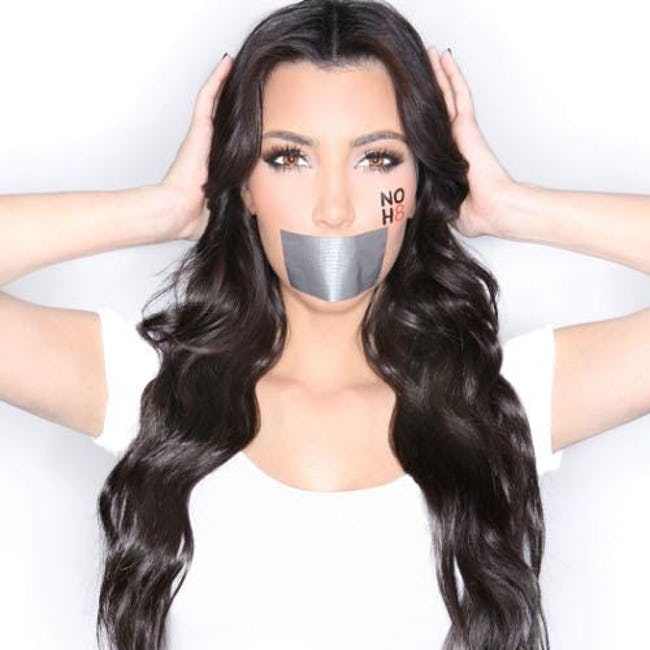 Kim Kardashian poses in support of the “NO H8” campaign for marriage equality. (Photo courtesy of Instagram)

Kardashian supports gay rights through reported contributions to the Elton John AIDS Foundation and the True Colors Fund, which works to end homelessness among LGBT youth and “create a world where all young people can be their true selves.”

She has said that the U.S. Supreme Court decision legalizing gay marriage made her “proud to be an American.”

Museveni, in contrast, signed the country’s harsh anti-gay law in 2014 and has presided over continuing anti-LGBT repression even after that law was overturned.

Ending that repression would make Uganda much more appealing as a tourist destination, but West and Kardashian didn’t mention that, even though they talked about dreams of economic development — to make Uganda like “Jurassic Park” or Marvel Comics’ “Wakanda.”.

West gave Museveni a pair of his Yeezys line of sneakers, which he and Kardashian signed.

Some observers said Museveni may have arranged the meeting to gain Trump’s attention.

That’s the theory of Dr. Jonathan Fisher, an expert in African politics at the University of Birmingham who was cited in a BBC article:

Dr Fisher thinks that meeting with Kim and Kanye is a way for Mr Museveni to put himself on Donald Trump’s radar – after all, we know Kanye and Trump get on.

The benefits to Uganda could come in the form of military training, arms and development money from the US if Mr Museveni gets in Trump’s good books.

Critics said the meeting was designed to distract attention from the Ugandan government’s violent mistreatment of opposition leader Bobi Wine. 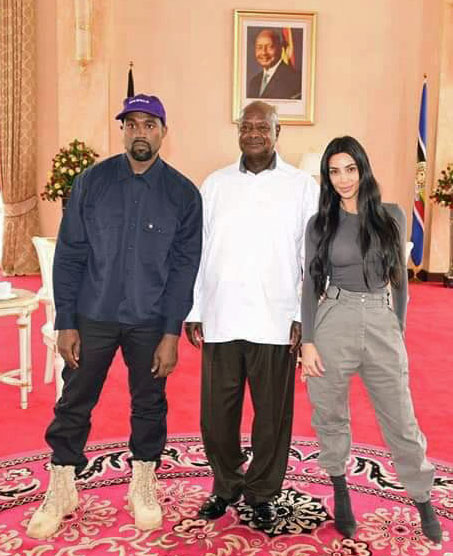 In front of a photo of Ugandan President Yoweri Museveni that Museveni has on display, he poses with American celebrities Kanye West and Kim Kardashian. (Photo courtesy of Twitter)

Wine, an MP and one of the east African country’s best-known popular musicians, said it was “immoral” for West to use his image “just to rub shoulders with the president”.The politician, who was arrested while campaigning in northern Uganda in August and then badly injured in detention, said: “He is hobnobbing with a president who has been in power now for 32 years and restricts any freedom, a country where opposition activists are tortured and imprisoned.”

Three people were killed and about 100 arrested in unrest that followed Wine’s arrest. More than 80 artists, activists and politicians signed a statement condemning his treatment. Signatories included Chris Martin, Chrissie Hynde, Brian Eno and Damon Albarn, as well as African musicians such as Femi Kuti.

His return in September from the US, where he had sought medical treatment, prompted a massive security clampdown.

“It would have been great if he had used his voice for the good of people in Africa,” said Wine, whose real name is Robert Kyagulanyi. “I’m a musician but I am not allowed to stage a show in my own country because I disagree with the president. It is very disappointing.”

A BBC writer was mystified:

We’re not entirely sure why Kim and Kanye met Mr Museveni – or who instigated the meeting.

We do know that the president gave Kanye the Ugandan name “Kanyesigye”, which means “I trust”, and Kim was named “Kemigisha”, which means “the one with blessings from God”.

People magazine reported that Mr Museveni asked Kim what her job was, to which she politely replied that she had a reality show with her family.

We also know that Kanye said he “intends to put up a world class tourism school”, according to Mr Museveni.

According to TMZ, Ye even said the school was going to be like “like Jurassic Park”, and that he wants to make the country thrive “like Wakanda”.

“Hopefully Kim & Kanye are in Uganda advocating for its LGBTQ citizens who face a government that has one of the worst records on LGBT rights & safety anywhere in the WORLD, giving President Museveni a pair of shoes, while he advocates for gay men to be burned in public.”