Northern Cameroon’s only gay-rights advocacy group is seeking help with beefing up security after its headquarters was vandalized last week.

Vandals pried their way through the front door of AJSG’s office in Garoua. (Photo courtesy of AJSG)

The work of Association Jeunes Solidaires de Garoua (Young Solidarity Association of Garoua, or AJSG) includes fighting against HIV and fighting for recognition of the human rights of LGBTI people.

It has been operating in Garoua for several years, managing several Global Fund anti-AIDS projects. AJSG also is a partner with the Erasing 76 Crimes blog and the St. Paul’s Foundation in their Not Alone / Pas Seul project delivering food to incarcerated victims of Cameroon’s anti-homosexuality law.

AJSG is a member of the UNITY Platform, the nationwide human rights watchdog program that is currently supported by 32 Cameroonian human-rights organizations. 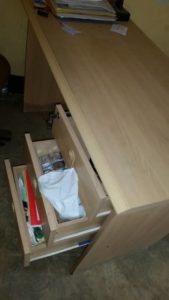 Members of the region’s LGBTI community often visit the AJSG headquarters for reasons such as seeking HIV information and getting safe-sex supplies.

M., the executive director of the organization, stated:

“Our premises have become a place of meditation for marginalized people in the northern Cameroon region. Despite the strong advance of Islam in this region, we have always managed our missions successfully and satisfactorily. “

At around 9 a.m. on Friday, Feb. 8, M. received a call from his colleagues announcing that the premises had been vandalized by unidentified people at night. The central door of the headquarters was forced and several documents were stolen.

M. had been in the city of Douala for a meeting of the UNITY Platform. During that meeting, five new organizations were welcomed as platform supporters — Trecia 3A, Positive Vision, Transigeance, WellBeing and WIFC. The platform has thus grown from 28 to 32 identity organizations within it.

Steeves Winner, the author of this article, is an activist for LGBTI rights in Cameroon who writes under a pseudonym. Contact him at [email protected] .