Dramatic increase in violence against LGBT people in Cameroon

The 2018 report on violence against LGBT people in Cameroon shows a sharp and shameful increase. This alarming situation is due to widespread ignorance.

Among the many human rights violations described in the report “Ignorance” is the murder of 22-year-old Kenfack Tobi Aubin Parfait, who was beaten to death by his older brother on suspicion of being gay. 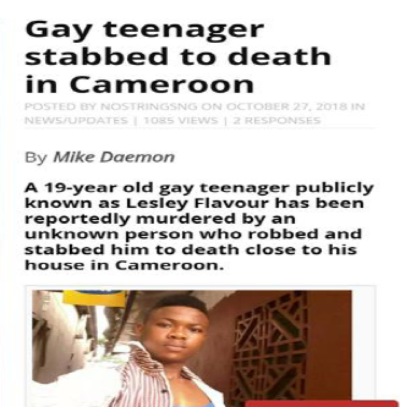 The report “Ignorance” includes an account of the murder of gay teenager Lesley Flavour, who had long been the victim of homophobic mockery and attacks.

Humanity First Cameroon and Alternatives-Cameroon are two leading organizations advocating for human rights in Cameroon, with a particular focus on the rights of LGBT people.

Working together and in cooperation with other groups throughout the country — namely Positive Vision, AAH, Alcondoms Cameroun and ASEMIR de l’Ouest — they have compiled a report on anti-LGBTI violence and rights violations in the country during 2018. Its title is “Ignorance.”

The report documents 1,134 cases of violence and abuse against LGBT people during 2018 — almost twice the figure of 578 such cases reported in 2017. 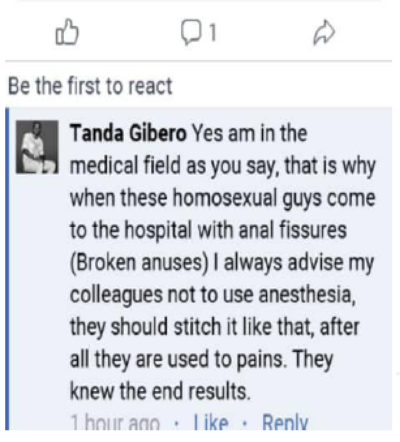 This example of a medical worker advocating torture of gay men is included in the report “Ignorance.”

During the year, three people were murdered because of their real or suspected sexual orientation.

In a case that shocked the LGBT community, Kenfack Tobi Aubin Parfait, 20, was murdered by his older brother who had suspected him of being gay.

Contributing causes behind such violent acts include a disregard for basic principles of human rights, and misconceptions about gender identity and sexual orientation.

The yearly report seeks to reduce that kind of ignorance.

Psychological abuse makes up most of the documented cases in 2018. These include threats, intimidation, insults, and much more.

Article edited Colin Stewart, the editor/publisher of this blog and by Bruno Agar, Ph.D., member of the African Human Rights Media Network and lecturer at the University of Paris-Saclay Evry-Val-d’Essonne. His professional focus is on contemporary media issues, especially in the African context.