With the death of activist Marc Lambert Lamba, Cameroon lost a pioneer in the fight against anti-LGBTI violence.

Pall bearers prepare for the burial of Lambert Lamba on Aug. 17, 2019.

The news came on Aug. 4, when the LGBTI community of Cameroon learned that activist Marc Lambert Lamba, age 45, had died in Yaoundé following a stroke.

As an activist, he was well known both in Cameroon and abroad because he has appeared in several documentaries about Cameroon on foreign TV channels, including France 24.

“We have just lost a huge fighter on behalf of homosexuals in Cameroon,” said Alice Nkom, a Cameroonian lawyer involved in defending the rights of homosexuals.

Marc Lambert Lamba started his activism after he was released from prison in June 2006. He had been arrested in May 2005 during a police raid on a bar in Yaoundé with 10 other men, all accused of being gay. In Cameroon, homosexual activity is illegal and is punishable by up to five years in prison.

He spent more than 10 months in prison.

“After this episode, Lambert spent his life fighting for human rights and the oppressed. He was in every fight,” said Nkom, who had defended him in court. 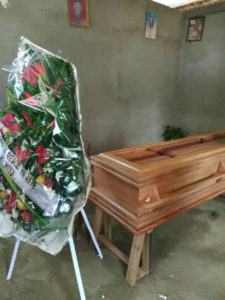 A floral tribute stood in front of the coffin at the funeral for Lambert Lamba.

In 2016, after his release, he founded Cerludhus (the Center for Reflection and Action for Human Rights and AIDS), an association to help homosexuals in vulnerable situations in Yaoundé.

As an activist advocating the rights of LGBTI people as well as injectable drug users, he became an emblematic figure in the LGBTI community for his work through several organizations, including ADEFHO (the Association for the Defense of Homosexuals), and Alternatives Cameroon.

Since March 2019, he had been an advisor to Cameroon’s human rights watchdog organization, the Unity platform. He also served as its vice-president.

Although he often received death threats, “Lambert never asked for asylum. He did not want to leave because his place was there in Yaoundé, to help others,” Nkom said.

A member of the Bassaa tribe, he was buried on Saturday, Aug. 17, after funeral services that his family organized for him in his hometown of Nkondjock near Puma. After a worship service, testimonials in his honor were delivered by the current president of the Unity platform and by the eldest in the family. They praised him as a person was humble, helpful, hardworking and always at the service of others.