We freed 3 gay men from prison

A and his friend Y (names withheld for their safety) walked free on August 30, having served four years of a five-year sentence imposed after they were reported to police by a hotel receptionist on June 24, 2015.

In the short term, their release was made possible by caring people in the United States who contributed money to pay their fines and court costs totaling $777.

In the medium term, the men’s liberation was made possible by advocacy journalist Steeves Winner, who writes for the Erasing 76 Crimes blog (76crimes.com) and the companion 76 Crimes en français blog (76crimesFR.com) along with the northern Cameroon gay-rights group Association Jeunes Solidaires de Garoua (AJSG) and attorneys Stephane Aboa and Honoré Kenko of Défenseurs Sans Frontières (DSF). The DSF attorneys worked pro-bono during a one-week exploratory trip to northern Cameroon that was financed by $1,300 in donations.

In the longer term, the men’s release was made possible by people backing the St. Paul’s Foundation for International Reconciliation, which supports LGBTQ rights advocacy journalism such as the Erasing 76 Crimes blog. The blog’s seven years of coverage of LGBT rights issues in Cameroon and its support for imprisoned gay Cameroonians laid the groundwork for this month’s achievement in northern Cameroon. 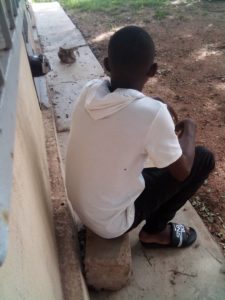 After his release from Tcholliré Prison in North Cameroon, a young gay man ponders his future as a free man. (Photo courtesy of AJSG)

Earlier in the summer, the blog also helped to arrange the release of that region’s third gay prisoner, who was nearing the end of a three-year sentence at Tcholliré Prison. He was released months early after his U.S. $243 in fines and court costs were paid by an American reader of the blog.

To allow such work to continue and expand, the St. Paul’s Foundation is seeking additional financial support.

Some LGBTI rights activists questioned whether such a strategy is wise.

“While I think it great that he is out of jail, I would also caution about this approach,” one activist stated about the early-summer release from Tcholliré Prison. “What may happen is that the local police hear that there are ‘donors’ willing to pay to get people out of jail, and see it as a new source of income.”

Colin Stewart, president of the St. Paul’s Foundation, acknowledged that the strategy must be used with discretion.

“If police knew that donors would pay bribes to get LGBT folks out of jail, that would be an incentive for further bribery,” he said. “But in this case, the donations paid fines and court costs that were imposed years ago in court. Paying them now doesn’t create an incentive for more such fines.”

The strategy the Cameroonian activists used to free the three gay prisoners might serve as a model for similar action in some other homophobic countries, but not in many, Stewart said. Few nations have the combination of factors that make such an operation possible — an enforced law against same-sex intimacy, but with relatively few LGBT citizens serving long prison sentences; and LGBTI rights activists allowed to operate openly.

In many of the 72+ countries with anti-gay laws, such support for LGBT prisoners would not be feasible because the society is either relatively more tolerant or more repressive than Cameroon.

Below is an update on how A and Y are faring, followed by a reminder of how their case began.

Neither man currently has access to a smartphone, so no photo of them is available. The graphic accompanying this article is the one that was used the Not Alone / Pas Seul campaign that raised money for deliveries of food to them at Guider Prison and the third gay prisoner at Tcholliré Prison.

Location of Cameroon in west-central Africa.

A and Y are currently living in eastern Cameroon with a gay Muslim friend. A is working as a motorcycle taxi driver, a job that provides enough money for them to live and eat. Y hopes to get back into business for himself. Before his arrest he had been a peanut merchant. Both men wish they could leave the homophobic climate of Cameroon but they lack the resources to do so.

Their families remain hostile to both of them.

Thanks to our deliveries of hygiene items and their release from prison, their scabies has vanished, but the memories of the threats, intimidation and violence of their years in prison are still vivid and even traumatic.

It started without our realizing it. We began dating and then we let ourselves be carried away. We were happy.

We met at a hotel for privacy and to avoid suspicious looks. All went well for a while. But then the hotel receptionist became curious, started keeping track of our visits, and then called the police. We did not know that was happening. We suspected nothing.

I do not know how they knew we were homosexuals because we never arrived at the hotel together. One of us reserved the room in advance. The other entered discreetly.

On the afternoon of June 24, 2015, police officers knocked at the door of our hotel room. Panicked, we looked for a way to escape but did not find one. The police beat us up and then arrested us as criminals.

Police locked us in a cell for four days. During that time, none of our families came to see us, despite phone calls and letters. If we had more money, perhaps we could have bribed our way out of jail and avoided the trial.

We were transferred to the prosecutor’s office. Then we were tried and sentenced to six years in Guider prison. [Both men were sure their sentence was for six years until the arrival this summer of the lawyers from DSF, who learned it was a five-year sentence.]