On Christmas Day, LGBT refugees in Kenya again were the targets of homophobic attacks. It was just the latest outrage against LGBT asylum-seekers who are repeatedly told that, no matter where they are, they must go elsewhere or face violent reprisals.

47 LGBT refugees spent the Christmas holidays camping outside the Kakuma Camp reception center in hopes of avoiding violence in the camp. (Photo courtesy of the African Human Rights Coalition)

A year ago, LGBT refugees were evacuated to Nairobi from Kakuma refugee camp because the camp was unsafe for them. (“U.N.: We’re moving LGBT refugees out of unsafe Kakuma Camp.” December 2018, 76crimes.com)

Then, six month ago, they were forced back to the camp because the Nairobi move didn’t work out. (“Roundup of 76 gay African refugees: Desperate, dangerous, confusing times” — “Confusion surrounds this week’s heartless decision to move 76 gay refugees from Nairobi back to the often violently homophobic Kakuma refugee camp from which they were evacuated for their safety late last year.” June 2019, 76crimes.com)

At Kakuma Camp, other refugees repeatedly attack them, the authorities fail to protect them, and they’re not allowed to move to anywhere safe.

The O-blog-dee blog reports on the latest abuses

From one year to the next -– all roads have led back to the violent and dangerous Kakuma — that is for gays, lesbians, transgender refugees and asylum seekers. All roads lead to a system that has failed.

It is Xmas day. Two nights ago, while asleep for the first time in their new shelters at Kakuma in Kenya, LGBTI refugees were attacked and robbed. They were told to flee or they would be killed. Some ran for the bushes with 2 still missing and approximately 47 others risked camping outside the Reception Center in the hope that they may finally receive some real protection and security. Two refugees were arrested while allegedly trying to obtain water in an non-permitted zone.

At the time of writing this, and after several requests for urgent attention during holiday time, other than receiving food as orchestrated by Marc Cohen of African Human Rights Coalition (African HRC), we have yet to see any help or protection. The situation is dire and the refugees remain in grave danger. We are now also hearing of more refugees within the camp who may have to escape their shelters under fear of pending attacks.

Now the suspicion has been raised that the refugees were actually purposely sent into an area where authorities and officials knew that they would be attacked. Something is dramatically amiss when refugees, escaping from violence in their home countries, cannot experience safety on the very first night of their supposed protection in safe shelter.

This does not bode well for those who knowingly sent them into this insidiously dangerous place, in close proximity to those likely to attack, especially as these attacks had happened before.

Overview of a portion of the huge Kakuma refugee camp in Kenya, where many LGBTI Ugandan refugees are held. (Photo courtesy of Ephemerian)

One is forced to ask the question – surely those who made the decision to send these refugees to Kakuma 3 Block 8 and 9, while charged with their safety, must have known the risks? This clearly plays into the belief that they were purposely placed in a zone that was so unsafe it was highly probable they would be attacked, dispersed, injured or even killed.

This confusion is now heightened by the fact that at African Human Rights Coalition we have now received reports stating that the Kenyan police at Kakuma ordered the LGBTI members who had been relocated by UNHCR into the Kakuma community to leave Kakuma “or else be arrested and jailed for up to 14 years.” Kenya is a proven hostile host to LGBTQI refugees.

Notably this has occurred mere months after the Kenyan High Court refused to decriminalize homosexuality, and so when LGBTI refugees arrive in Kenya from neighboring criminalizing countries they continue to be viewed as demonic, depraved and criminal.

As one LGBTI refugee witness reported to us at African HRC:

“This followed after the LGBTI members in Kakuma community ran to the police to seek help and safety after 2 days of violent attacks and robberies on them by the hostile local Turkana people and other settlers especially the straight Sudanese.

… Right now, the LGBTI members who are victims of last night’s attacks have embarked on a trek to the UNHCR fieldpost in Kakuma to seek refuge again in the hope for a safe place. It is official that Kenya does NOT want us (LGBTI) and we are not safe here.”

“Why did the UNHCR force us out of the camp reception centre in the first place yet they promised to keep us safe from within there and even beefed up security, only to evict us into the hostile community again. Why???”

In 2017, these LGBTI refugees trekked to the office of the U.N. High Commissioner for Refugees, fruitlessly seeking safety.

It is abundantly clear to me, given the trajectory of these preceding years and especially this past year, that a completely new strategy must be sought and implemented for LGBTQI refugees and we in this field have a duty to come up with this plan and to move fast before more people are permanently injured and more lives are lost.

I refuse to believe that while American based NGO’s yield millions of dollars in revenues, that we cannot come up with something innovative to partner with UNHCR that could feasibly change this – to protect the now 700 refugees in Kenya who are LGBTQI?

Should we bus everyone to Botswana where it is not illegal to be LGBTQI? Should we find ways to assert Lautenberg Amendment type remedies, similar to that which Jews were granted during the USSR era of persecution — so they could practice their religion without persecution? What can we do to help LGBTQI humans live freely according to their innate sexuality? 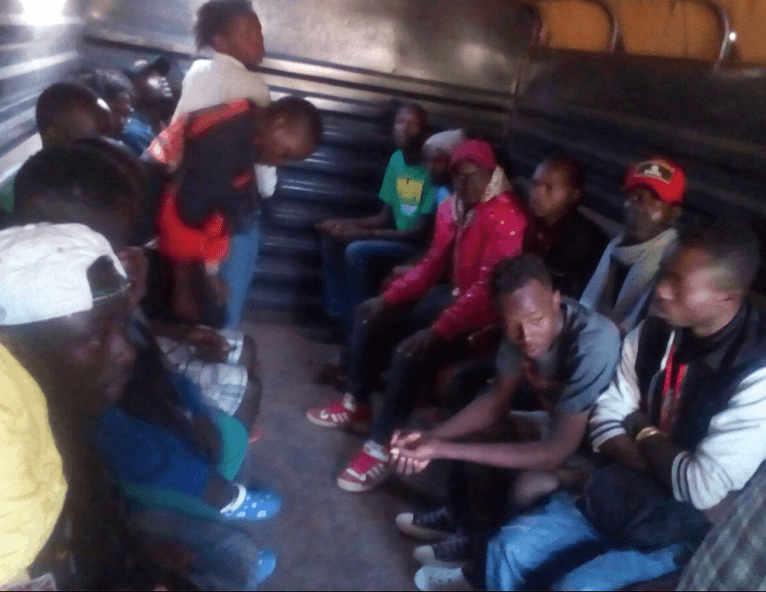 After being moved from Kakuma to Nairobi for their safety in December 2019, these LGBTQ refugees were arrested by Kenyan police in June 2019 during a roundup of refugees. They were then bused back to the dangers of Kakuma Camp. (Photo courtesy of the O-blog-dee blog)

At the very least, UNHCR, charged with the protection of refugees, MUST find and build within Kakuma a well guarded and safe protected shelter where LGBTI refugees can reside unharmed while these solutions are sought.

Lest we forget that the Trump administration in the United Sates has added fuel to this incendiary by clogging the pipeline through ineptness and short staffing at RSC Africa (the State Department Agency charged with resettlement to the USA) and the dramatic reduction of refugee resettlement numbers from 136,000 to only 18,000 per year.

For as long as the Kenyan government demands that ALL refugees reside in camp, and refuse travel permits within the country, and for as long as gay, lesbian, bi and trans refugees are attacked by local host communities including Turkana in Kakuma, as well as the Sudanese/ Somali heterosexual refugee community, and for as long as they cannot return to home countries because they have run for their lives, LGBTQI asylum seekers are caught between a rock and a hard place. They cannot move freely, they are subject to arrest when they try to seek safety or report violence, they cannot develop self-reliance programs like the refugees due to continued ostracization and exposure and so they are stuck facing sticks and humiliation.

This problem cannot be ignored. It must be solved. And soon!

For more information, read the full O-blog-dee article: “Kenya proves it can no longer host LGBTI refugees due to escalating violence.”

Loading...
Newer Post
Anti-gay violence remains a danger in Africa and worldwide
Older Post
Uche Jombo’s new film has a lesson for scamsters who pretend to be gay