Four young adults in eastern Cameroon were thrown out of their homes after their work at an anti-AIDS training session came to light.

The logo of the advocacy group 2HRC (Health and Human Rights Cameroon).

In the city of Bertoua, activists at the advocacy organization 2HRC (Health and Human Rights Cameroon) on April 14 presented an information session about safe sex and Covid-19 prevention.

During the workshop, they distributed condoms and lubricating gel for prevention of HIV to the five gay men and trans people who attended.

That afternoon, one participant, William (pseudonym) a 20-year-old man, went home and examined the HIV prevention kit he had received. Unfortunately, his parents spotted it. They threatened him and demanded that he reveal where he had gotten the lubricant, which they believed was only used by homosexuals.

“It was given to me by friends. It’s used during sex to prevent sexually transmitted infections,” he said.

William agreed to show his parents where each of the four 2HRC instructors lived. Two of them lived together in an apartment and others lived in single rooms. 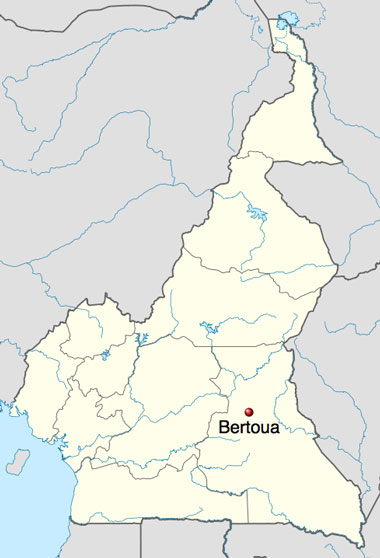 The location of Bertoua in eastern Cameroon.

Their families and neighbors expressed dismay when they were told what the activists had been doing.

Parents and neighbors concluded that their young men were homosexuals. They told the district’s traditional chief. Crowds gathered, casting insults at the four young safe-sex activists.

When the trans woman spoke up to defend herself, she was attacked by William’s older brothers, who kicked her in the groin. She suffered serious injuries and was left with testicular pain. She fears she has a hernia.

The next day, the chief ordered the four 2HRC activists to leave the area. Their landlord also demanded that they move.

The activists begged not to be turned over to police. The chief accepted their plea.

The three gay men and the trans woman are currently homeless, which is particularly risky these days, since Cameroonians are encouraged to stay at home to avoid Covid-19 infection.

Courtney Sans, the author of this article, is a Cameroonian journalist who writes under a pseudonym. Contact her at [email protected]