Police in the western region of Cameroon arrested four men on Tuesday who were beaten until they acknowledged that they were gay. 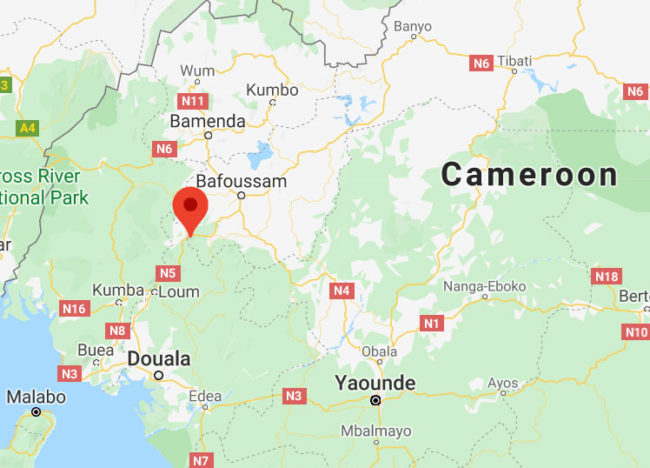 Kekem, Cameroon, is north of Douala toward the Nigerian border. (Map courtesy of Google Maps)

It was around 9 p.m. last Tuesday when Charles, 27, went to a secluded spot behind a school building for a rendezvous proposed online by Garusse and Jordan, two men he didn’t know.

Instead of the enjoyable encounter Charles hoped for, the men beat him up.

Bruised, he returned to his family home and explained what had happened. Instead of comforting him, family members beat him up again. They forced him to tell them which of his friends were gay.

The family alerted police, who arrested the four young men and tortured them until they acknowledged their homosexuality.

On Friday, June 12, police turned them over to the prosecutor at Bafang District Court. Joël was released, thanks on the intervention of his older brother, a lawyer. The other three were placed in pre-trial detention at the prison in Bafang.

They were scheduled for a hearing today (June 15) on charges of indecency and engaging in homosexual behavior.

Under Article 347-1 of the Cameroonian penal code, the practice of homosexuality is punishable by up to five years in prison, but that law does not make sexual orientation a crime without intimate sexual relations.

In the Kekem case, police produced no evidence of homosexual activity. As a result, LGBTI rights activists consider the arrests illegal.

The LGBTI-friendly groups Working for Our Well-being and Defenders Without Borders (Defenseurs Sans Frontieres) have stepped in to help with the defense of the three defendants.

The three also appealed for help from a psychologist and a doctor.