Sara Hegazy, 30, committed suicide on Sunday, June 14, more than two years after she was arrested for raising the rainbow LGBTQ+ pride flag in Cairo. She spent three months in Egyptian prison and left with severe PTSD and depression. 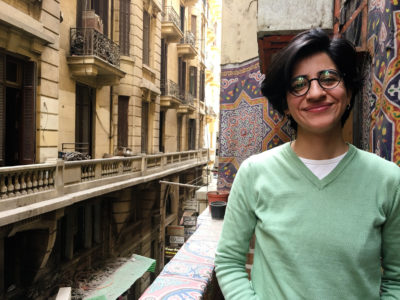 Sara Hegazy in Cairo, Egypt, after being released from jail in 2018. (Photo courtesy of NPR)

Egyptian LGBTQ+ activist Sara Hegazy took her own life on Sunday (June 14) in her new home in Canada. Hegazy, 30, left a note asking forgiveness from her friends and family: “The experience [journey] was harsh and I am too weak to resist it, forgive me. To the world – you were cruel to a great extent, but I forgive.” 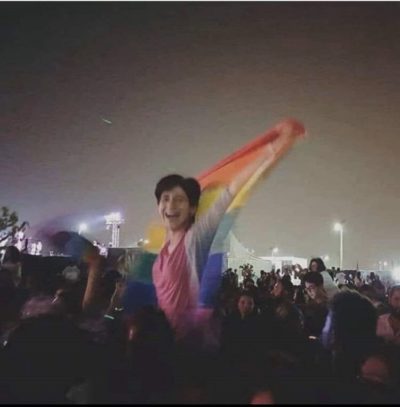 Hegazy raised the pride flag at a rock concert in Cairo, 2017. She was arrested a week after the concert. (Photo courtesy of Twitter)

Hegazy gained international recognition for her activism in September 2017, when she raised the rainbow pride flag at an indie-rock Mashrou’ Leila concert in her home city of Cairo. She raised it in solidarity with the band’s lead singer, Hamed Sinno, who is an openly gay Lebanese LGBTQ+ advocate, and “for everyone who is oppressed,” she told NPR in 2018. “We were proud to hold the flag. We wouldn’t have imagined the reaction of society and the Egyptian state. For them, I was a criminal — someone who was seeking to destroy the moral structure of society.”

Shortly after the concert, Hegazy was among one of 57 attendees arrested for raising the flag and related offenses. She was charged with “promoting sexual deviancy and debauchery.” She spent three months in prison, where she was first put into solitary confinement and later incarcerated without exercise privileges alongside women who were ordered not to speak to her. She was reportedly beaten by inmates and tortured with electrocution by prison officials.

When she was released on bail three months later, she left with severe depression and post-traumatic stress disorder. “Prison killed me. It destroyed me,” she said. Several weeks after her release, she fled to Canada, where she was eventually granted asylum. 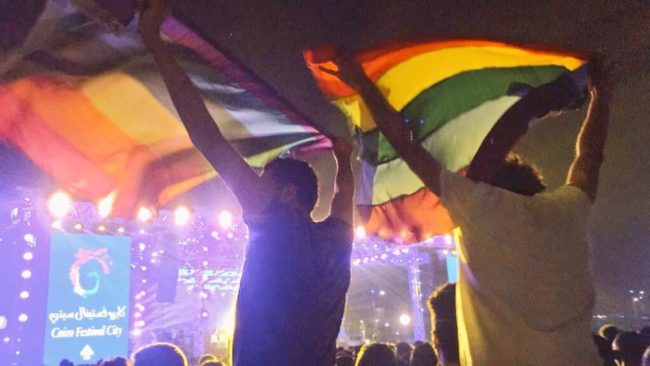 These gay rights advocates also displayed a rainbow flag at the 2017 Mashrou’ Leila concert in Cairo. (Photo courtesy of Facebook)

Egypt has no written laws explicitly criminalizing homosexuality, but under President Abdel-Fattah al-Sissi, statutes governing “habitual debauchery” have been employed to prosecute LGBTQ+ individuals and those who advocate for LGBTQ+ rights. According to the Egyptian Initiative for Personal Rights, “The law is ambiguous enough to allow the judges to punish people for their sexual orientations and sexual practices, and sometimes even for their perceived orientations.”

Two days before her death, Hegazy posted a photo to Instagram with the caption, “The sky is better than Earth. And I want the sky not Earth.” Her passing is being mourned across the world by the LGBTQ+ community. May she rest in peace.

Bridget Stauss, the author of this article, is a senior at Amherst College, Massachusetts, U.S., studying history and international relations.

If you are in the United States and are having suicidal thoughts, suffering from anxiety or depression, or just want to talk, you can call the National Suicide Prevention Lifeline at 1-800-273-8255 or the Trevor Project at 1-866-488-7386.