Hate speech on Facebook: Some progress, much remains to be done

Facebook has taken action to slow the spread of hate speech in response to protests by LGBTIQ+ activists in the Middle East and North Africa. But more needs to be done, the activists say. 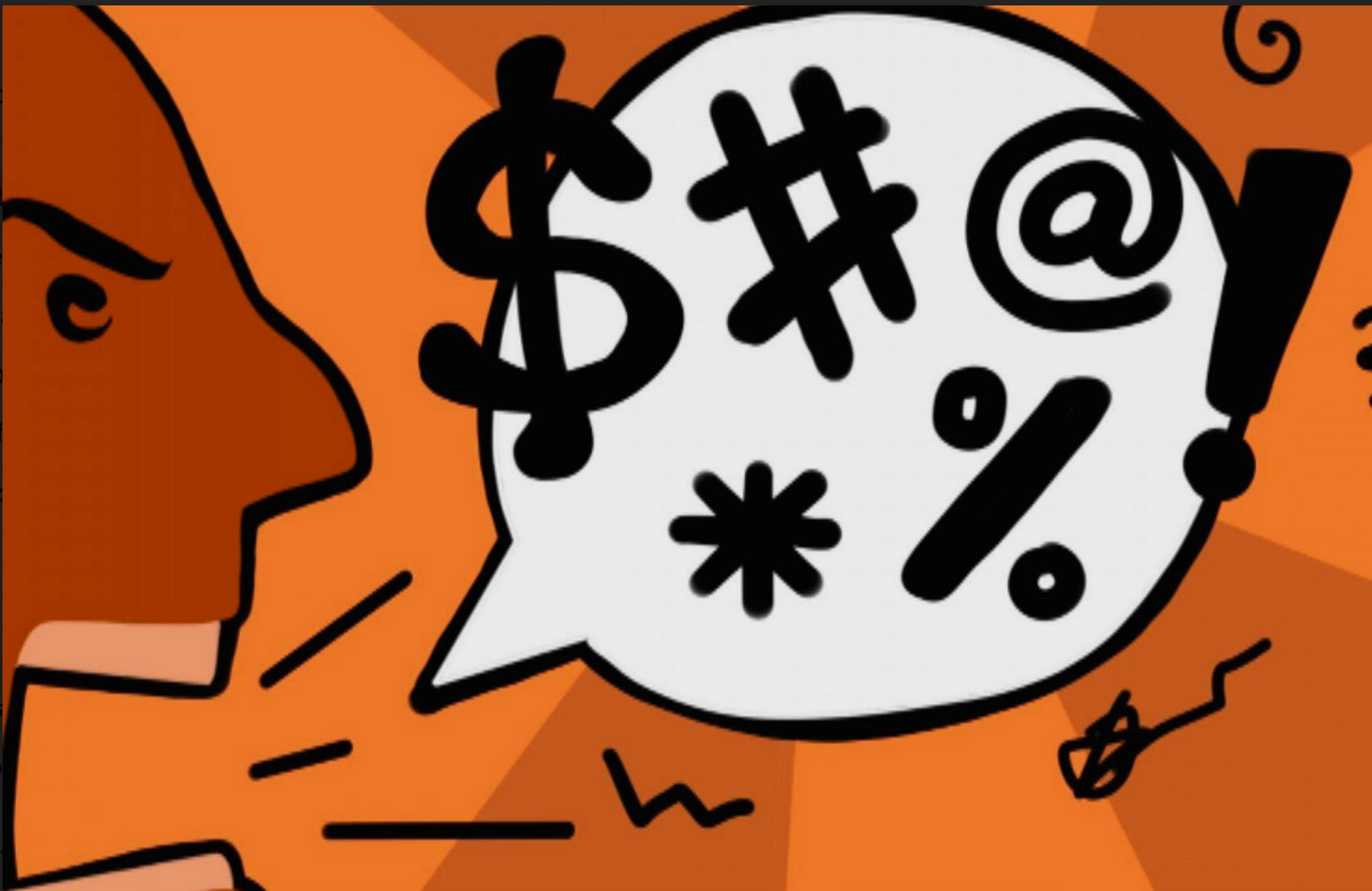 Graphic from the report “Hate Speech Spreads Like Wildfire”

The protests came in the wake of queer Egyptian activist Sarah Hegazy‘s suicide in June after she was tortured in an Egyptian prison and, when freed, became the target of hate speech.

In connection with the anti-hate-speech initiative, several advocacy groups in the Middle East and North Africa (MENA) prepared a report about hate speech on social media as experienced by LGBTQ+ people in the region.  That report, Hate Speech Spreads Like Wildfire, which was released today, comes with a trigger warning: “This content is disturbing, so we encourage everyone to emotionally prepare themselves before proceeding. If you believe that the reading will be traumatizing to you, then you may choose to forgo it.” 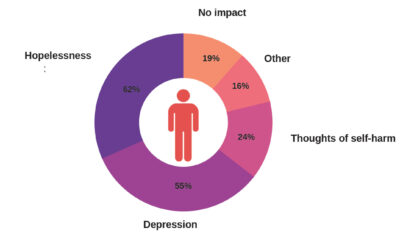 In response to online hate speech, nearly a quarter of people thought about harming themselves. (Chart from the report Hate Speech Spreads Like Wildfire)

Based on a survey of 450 LGBTQI++ Arabic speakers and allies, the report stated that 77 percent had been exposed to hate speech in the weeks leading up to the survey.  Nearby a quarter of the respondents said they thought about harming themselves because of the hate messages they received. For 92 percent of them, the hate speech was encountered on Facebook.

Today, more than 20 organizations focused on LGBTIQ+ life in the MENA region issued a press release praising Facebook for its recent response to complaints about hate speech and calling on it to do more.

They stated that Facebook had deleted a third of the hate-filled links that the group reported and had given its reasons for not deleting the remaining two-thirds. In general, Facebook removed items attacking individuals, but allowed “attacks on concepts”.  The organizations stated:

Violence and attacks specifically targeting LGBTIQ+ individuals were taken down, but the posts targeting LGBTIQ+ identity as an “ideology” were not. For the same reasons, it is not prohibited by Facebook community standards to call homosexuality or transgenderism a “sexual deviation”.

This is the press release:

Last month, following the release by 22 regional and international organizations of an open letter regarding the spread of hate speech on Facebook, a number of LGBTIQ+ activists, initiatives and organizations in the region began a conversation with the Facebook administration and specifically, [Facebook’s] Department of Public Policy in the MENA region. 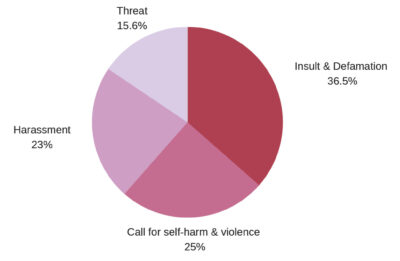 Insults and defamation are the most common type of online anti-LGBTIQ+ hate speech, with calls for self-harm and violence a close second. (Chart from the report Hate Speech Spreads Like Wildfire)

We shared with them our concerns and recommendations regarding limiting the spread of hate speech, most importantly putting hate speech towards sexual orientation and gender identity a top priority matter, training the Facebook team in the MENA region, adjusting Facebook’s community standards to ensure the fight against hate speech, and promote equality and non-discrimination policies, in line with the international covenants, while preserving freedom of opinion and expression.

Based on these discussions, Facebook has deleted a third of the links that we had reported, and Facebook explained that the other two-thirds were not deleted for several reasons. The main reason being,

B) For the same reasons, it is not prohibited by Facebook community standards to call homosexuality or transgenderism a “sexual deviation”.

At the same time, the Facebook administration has increased the classification of hate speech reports based on sexual orientation and gender identity in the region on the top of its priority list in terms of reviewing.

The signatory organizations and movements continue to cooperate in combating hate speech targeting members of the LGBTIQ+ community in the MENA region.

We are very concerned about the consequences of this hate speech, which was exposed in a report entitled “Hate Speech Spreads like Wildfire” issued today by a number of partner organizations and initiatives, where the report shows that 77% of the monitored sample was exposed to hate speech during the last period, 24% expressed thinking about harming themselves because of the hate messages they received, and that most of these messages were published on the Facebook platform (92%). 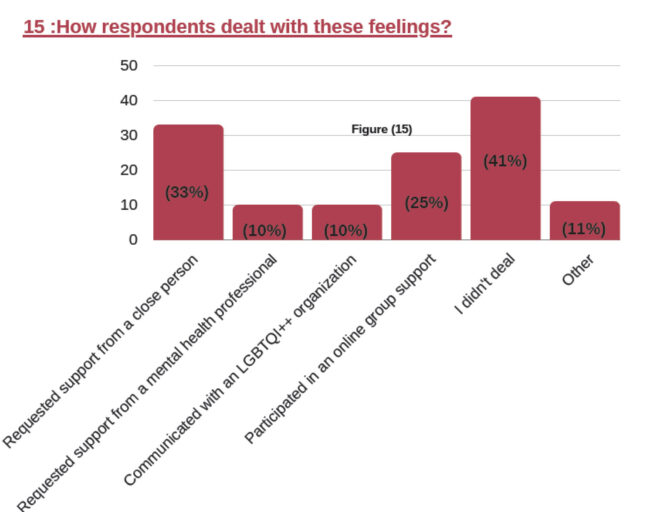 In dealing with online anti-LGBTIQ+ hate speech, a third of people turned for help to people close to them, with a quarter sought group support online. (Chart from the report Hate Speech Spreads Like Wildfire)

As for the nature of the messages, they contained insults and defamation (36%) as well as threats (16%), or calls for self-harm and violence (25%). 84% of these messages were from unknown people, 28% from friends, 19% from coworkers, and 17% from family members.

Appreciating these efforts, we call on them to take further steps to combat all forms of discrimination, stigmatization, and inequality against LGBTIQ+ community on its platform, including:

1- work to prevent the spread of un-scientific prejudices related to homosexuality, including but not limited to, pages and publications supporting (Practices of so-called “conversion therapy) for homosexual individuals, as the United Nations recently confirmed in a report that Conversion Therapy poses a threat to LGBTIQ+ lives around the world. And that all treatment efforts “are based on the belief that a person’s sexual orientation and gender identity can and should be changed or suppressed when they do not fall under what the majority believes, especially when the person is lesbian, gay, bisexual, trans, or intersex .” The report states that “subjecting to Conversion Therapy practices is degrading, inhuman and cruel acts and creates a high risk of torture.”

3- take further work to find a specific, clear, and complete definition of the different kinds of hate speech, provided that it includes all forms of direct and indirect discrimination against the LGBTIQ+ community and individuals – taking care that the strategy and action plan never call for restrictions on freedom of expression and opinion to address hate speech.

4- support alternative and positive speech and anti-hate narratives carried out by individuals, initiatives, and organizations working in the field and supporting LGBTIQ+ people in the MENA region.

It is worth noting that the organizations, initiatives, and activists participating in these discussions are making every effort to work at all levels to address such speeches, and commit to making more effort and promoting joint work for the success of these discussions. Besides, these discussions coincide with the long-term commitment of the United Nations to protect, promote, and implement all international human rights standards. Incidentally, we renew our request that UN human rights mechanisms – in particular the High Commissioner for Human Rights and the the Independent Expert on protection against violence and discrimination based on sexual orientation and gender identity, to urgently act to stop these ongoing rhetoric in order to maintain peace and security for all members of the LGBTIQ+ community in the region and worldwide.

These organizations issued the press release calling on Facebook to do more to address hate speech: