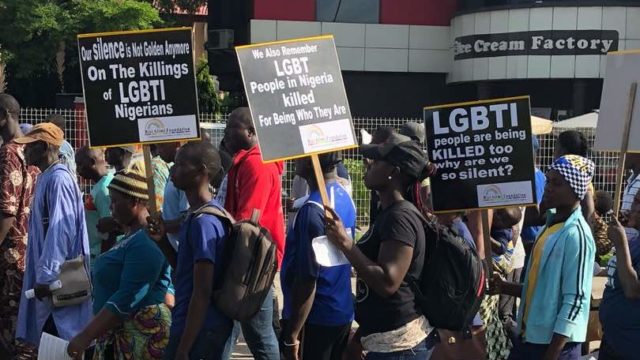 A public protest against killings of LGBT Nigerians in Nigeria.

Sharing his thoughts on Twitter, the activist wrote: “Can/Should we organize a national march to demand the respect of our dignity as humans?”

Do we have public activism in Nigeria with regardless to LGBTIQ inclusion?
Can/Should we organize a national march to demand the respect of our dignity as humans?🔥🌈✊🏽

LGBTQ+ Nigerians, allies and activists have never organized a physical gathering demanding repeal of the law, although many LGBTIQ+-focused organizations have been fighting hard against LGBTIQ+ discrimination and oppression in other ways.

In Nigeria, the Same-Sex Marriage Prohibition Act (SSMPA), enacted in 2014, effectively criminalizes LGBTiQ+ persons, outlawing public displays of same-sex affection and any support of homosexuality. The law stipulates a 14-year prison sentence for homosexual acts involving either men or women and a 10-year jail sentence to gay organizations, and anyone supporting same-sex marriages, or any display of same-sex affection.

Some people warned that a march such as Uchenna suggested would be unsafe. But others stated that, although the idea scared them, they would join a public protest against anti-LGBTIQ+_bias.

As it were, it’s unsafe to protest against government policies in Nigeria. Then top it with a common enemy for the people and government. Not sure it will end well.

Woah! Just the thought of it scares me. I would do it! Yes, the system is broken and all. I’d do it! But it scares the shit out of me…