Gay rights activists and human rights defenders in Uganda today marked the 10th Annual Kuchu Remembrance Day in memory of David Kato Kisule (RIP) and others lost due to homophobia and transphobia. The day also was  an occasion for members of Uganda’s LGBTQ+ communities to make a renewed commitment to rely on each other for strength. 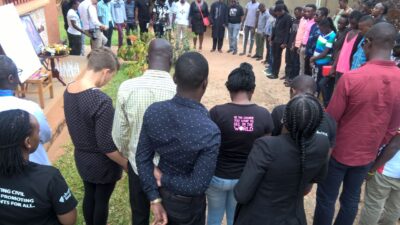 LGBTQ+ rights activist David Kato was brutally murdered on Jan. 26, 2011, at his home in the Mukono district near Kampala. Each year since then, members of Uganda’s LGBTQ+ communities, known as “kuchus”, have remembered lost friends and colleagues on that day.

This year’s memorials are happening virtually due to the threat of Covid-19.

Dr Frank Mugisha, the executive director of Sexual Minorities Uganda (SMUG), where Kato worked, issued a statement honouring him as a “remarkable man, an outstanding Human Rights activist, a friend, a brother, a drinking buddy and all-round lover of LGBTIQA+ Ugandans.”

Pan Africa ILGA, the African branch of the worldwide lesbian and gay rights organisation, stated that today is a day to “remember him and everyone who has lost their lives due to violence”.

The Youth On Rock Foundation, which works with LGBT male sex workers, stated that Kato “left the mark on which we stand”.

The Kuchu Remembrance Day 2021 statement is reproduced verbatim below:

Today we remember and celebrate the life of a remarkable man, an outstanding Human Rights activist, a friend, a brother, a drinking buddy and all-round lover of LGBTIQA+ Ugandans — the late David Kato Kisule.

The last year wasn’t very kind to the Ugandan LGBTQIA+ community. The hate crimes committed by the Uganda Police, enabled by an equally homophobic society, led to the arrest of 23 of fellow community members living in a shelter. The brutal arrest and unlawful detention of those living at the shelter would have been something Kato would be up arms, protesting and calling for their release.

Through the last couple of years, there has been an increase in the harassment, detention and brutal arrests of members of the sexual and gender minorities’ community. [Editor’s note: On Dec. 31, SMUG published a report on LGBTIQA+ Ugandans’ safety and security that documented the causes of human rights abuses.]

The pandemic (Covid-19) plus the election has made LGBTQIA+ life more uncomfortable and hostile than it already was.

This 2021 election, like many before, politicians like President Museveni scapegoated sexual minorities‘ lives by saying that “the homosexuals were funding the opposition”. The allegations he made have not been substantiated with any evidence except for the apparent homophobia behind his words. 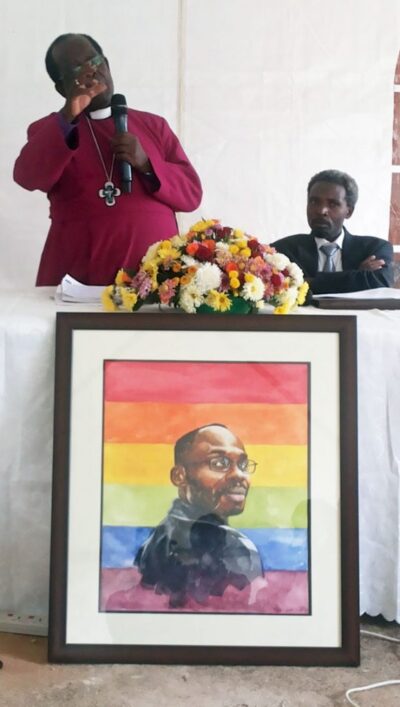 Bishop Christopher Senyonjo preaches to gay rights activists at a previous celebration of the life of David Kato.

Uganda continues with the criminalization of LGBTQIA+ lives through archaic legislation alongside violating fundamental human rights of our community. These laws have their roots in the old days of colonial rule. A colonial rule that was mirrored by a Victorian-style Christian morality. This morality tradition is now carried over by right-wing Christian groups in Uganda fueling homophobia.

We have lost members of our community due to the homophobic and transphobic backlash of the Ugandan society.

But today, we gather digitally because of the pandemic to pay tribute, to celebrate, to collectively mourn but importantly to draw onto each other for strength at a time when the pandemic has locked many of us back to our homophobic families and neighbourhoods.

Let us honour David Kato’s memory and the countless kuchus we have lost by recommitting to the values they sought to defend: the equal worth and dignity of every human being, regardless of their sexuality or gender identity.

Many LGBTQ+ advocates issued statements about Kato and other kuchus who have been lost to violence in Uganda.

On January 26th, 2011, David Kato, a very prominent Ugandan gay activist, was murdered at his home. Today, we remember David and all LGBTIQ activists who have lost their lives due to violence and hatred. Continue resting in power, David.

Youth On Rock Foundation joins the world to celebrate the life and the great work done by David Kato in promoting the human rights of LGBTQ. You left the mark on which we stand. May you rest in power.

On this day 10 years ago, one of Uganda’s most prominent gay rights activists, David Kato, was murdered in his home weeks after winning a court victory over a tabloid that called for #LGBTIQ to be killed. We remember him and everyone who has lost their lives due to violence.

Commemorating Kuchu Remembrance Day aka David Kato Kisule Memorial Day. Power to the spirit of all kuchus who have been forced to fall at the hands of State and non-state actors. #dkk10memorial #KRD_Ug

Naome Ruzindana, founding member of the Coalition of African Lesbians:

Continue resting in peace, my dear friend. You played your mission so well and am glad I walked with you side by side, lifted each other until your last hour. Bye Bye again. 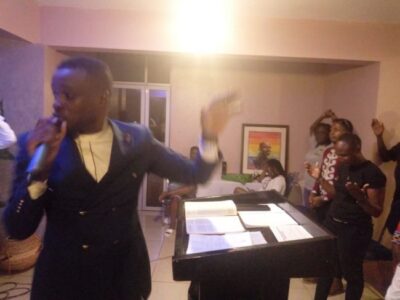 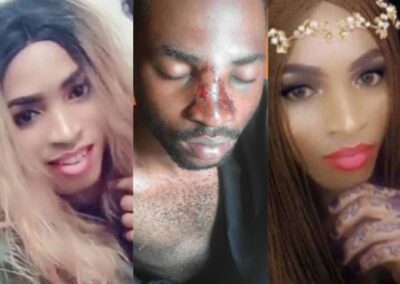 Transgender persons face high levels of stigma and discrimination in Uganda, as these photos show. Bruises from an attack on Zari, a trans woman, are visible in the center photo. The photos on each side show her with makeup before the attack.