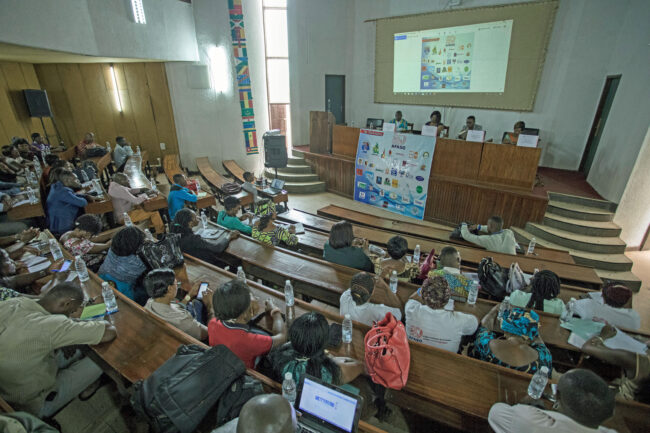 Affirmative Action took part in this conference in Cameroon about combating HIV among sex workers, trans women and men who have sex with men. (Photo courtesy of Global Fund Advocates Network)

Kevin Evina, the former advocacy officer of Affirmative Action, became the organization’s executive director during a hand-over ceremony on Jan. 22.

Addressing representatives of supportive organizations at the event, Evina said, “The fight against HIV / AIDS within LGBTI communities in Cameroon remains an imperative in view of the challenges that are looming before us. I cannot live up to this mission without your support and collaboration, so I invite all civil society to join forces for a solid response.”

Affirmative Action, which achieved official recognition in 2010, has brought commitment and professionalism to the fight against HIV / AIDS among key and vulnerable populations. It receives substantial financial support from the Global Fund for its work combating HIV/AIDS among local trans communities and with men who have sex with men.

Its projects have also included the PRIDE project subsidized by COC Nederland, the My Provider My Health project and more. It emphasizes HIV prevention through PrEP (pre-exposure prophylaxis medication), screening in non-medical settings, treatment of violence against LGBTI people and  support for young, emerging organizations.

Serges Yotta led the organization from its launch through this month. A talented manager, hard worker and respected advisor, Yotta has been a prominent community leader in Cameroon.

In December, Yotta became an advocacy director at Coalition Plus, an international coalition of community-based organizations fighting against AIDS. He officially turned over the leadership of Affirmative Action to his former colleague, Kevin Evina, at the convivial ceremony last Friday.

According to the Affirmative Action website, Evina has a master’s degree in the history of international relations and has worked as a human rights defender for 10 years. He has been spokesperson for the nationwide Unity human rights watchdog program and a member of the group of experts on key population issues supported by the United Nations Development Program (UNDP).