Online celebrity Shakiro and her companion, Patricia, have been convicted on homosexuality charges and sentenced to five years in prison. Their attorneys and other advocates vowed to appeal.

One of the many styles that Shakiro displayed on Facebook

DOUALA – A court in Cameroon sentenced two transgender women on [May 11] to five years in prison for “attempted homosexuality” and other offences after they were arrested for the clothes they wore in a restaurant, their lawyers said.

Human rights activists say their detention is part of the growing criminalization of sexual minorities and transgender people in Cameroon.

The two received the maximum sentence of five years in prison and fines of 200,000 CFA francs ($372.44), their lawyers told Reuters. Besides “attempted homosexuality,” they were convicted of public indecency and failing to carry identification.

“This is a political decision,” said one of the lawyers, Alice Nkom, who vowed to appeal the verdict. “It’s Yaounde (the central government) that said these people must not bring homosexuality to Cameroon.”

A government spokesman did not immediately respond to a request for comment.

Cameroon is one of more than 30 African countries where same-sex relations are illegal. Its courts have previously sentenced people to multi-year prison sentences for their alleged homosexuality.

Human Rights Watch said last month that Shakiro and Patricia’s arrests seemed to be part of “an overall uptick in police action” against sexual minorities [in Cameroon].

The Cameroonian human rights advocacy group Working For Our Wellbeing issued this protest on Facebook: 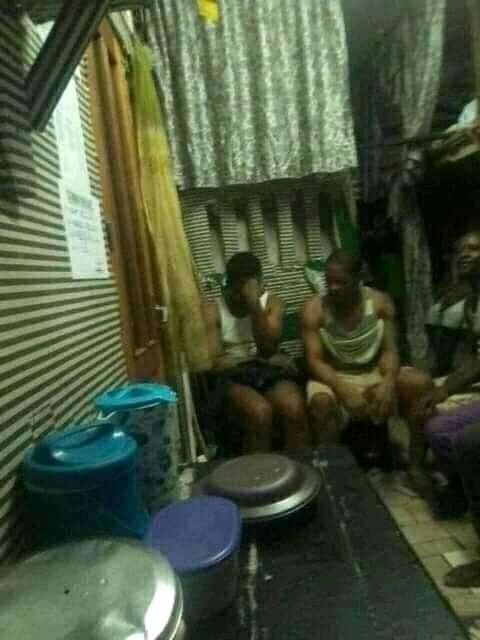 Shakiro in a police holding cell in February.

Today we cry — crying not for the sake that Shakiro and Patricia were sentenced to 5 years in prison but for the reasons behind. These two were beside the road where they normally go and eat roasted fish, waiting to be served but unfortunately they were instead arrested. For no justifiable reason.

Accused of Attempted Homosexuality, here is the big question, how did they attempt homosexuality in public? Even if they did, the population would have gone down on them.

So what went wrong? Who twisted our justice system?

What becomes the fate of gender and sexual minorities? Who do we run to? What is our future?

Living in a land where corruption, favoritism and bad faith has eaten up the very foundations of our being! Why?

We took upon us, closely followed the case since they were arrested on the 8th of February 2021, providing every necessary material and financial assistance. But we will not blink, we will not be bullied, we will not be intimidated, we are not giving up!

We will follow all appropriate measures provided by the Law. We will appeal!