African atheists and non-believers have a role to play in shaping society that is loving and inclusive to homosexuals, free from religious bigotry, persecution and violence, say the organizers of a meeting of activists and faith leaders organized by the LGBT advocacy group East African Visual Artists. 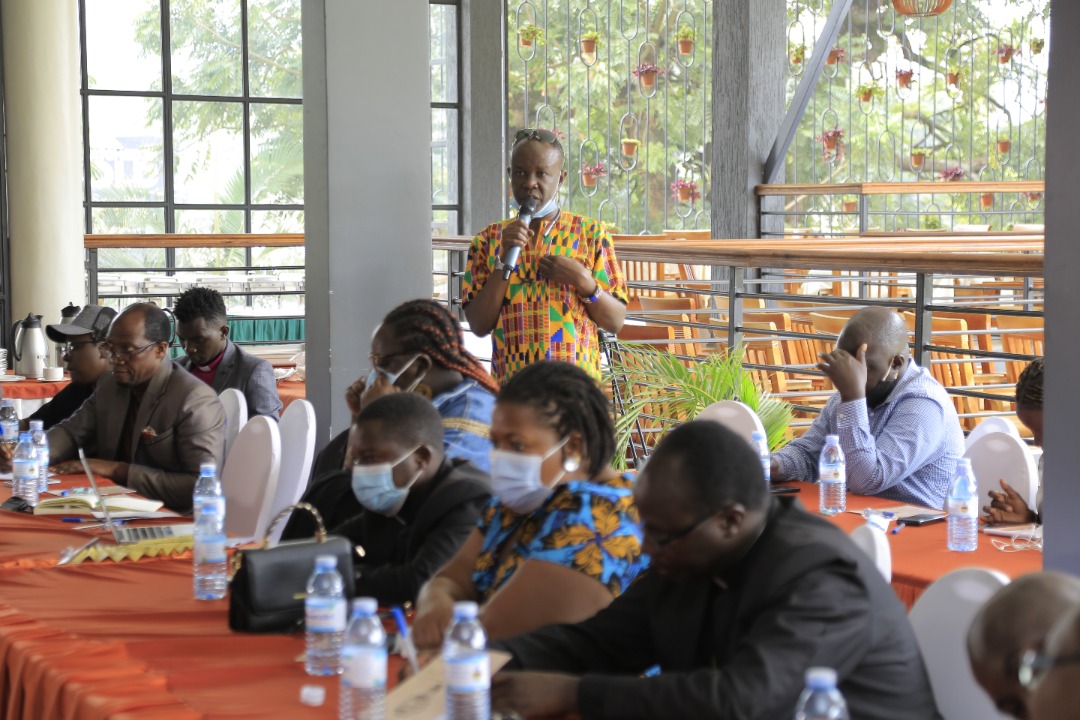 LGBT activist Geofrey Ogwaro, holding mic, addresses the meeting in Kampala on March 9, 2022. “All of us don’t have to believe in what everyone [else] believes,” he said. (Photo courtesy of EAVA)

[This is the second of two articles about the “Say No to Religious Homophobia” declaration, signed by more than 50 Ugandan LGBT rights activists and leaders at a March 9 meeting organized by East African Visual Artists. The first article in the series is “Ugandan activists launch campaign against religion-fueled homophobia.”]

At the March 9 meeting in Kampala, non-believers and atheists said they were being left out of discussions about shaping a harmonious and democratic society in Africa.

The meeting drew a cross section of religious leaders, LGBT activists, mainstream human rights defenders and non-believers to find a way of building inclusivity and tolerance to the LGBT faithful, and harmony to those that do not want to believe.

EAVA Executive Director Vincent Kyabayinze says his organisation continues to campaign to bring all persuasions and faiths into building a tolerant and inclusive society, including for homosexuals.

[Editor’s note: Reporter Kikonyogo Kivumbi, the author this article, is a member of the Coalition of African Atheists and Non-Believers. In that role, he spoke at the March 9 meeting. His remarks are below in italics.]

“The religious right has gone too far in Africa. One has a right to refuse to believe. That right must be respected.”

Religious homophobia in Uganda arises from putting religion at the center of public policy and law, yet Uganda is a secular constitution.

“And they (homophobic) religious leaders go on to ferment violence.”

Many post-colonial African states have demonised African core values embraced pluralism for all, including homosexuals.

“But all Africans have never consented to having the Bible or Abrahamic religious texts [Christian, Jewish and Muslim scriptures, which all revere Abraham as a foundational figure] as the operating manual for raising their children. Was the image of God colonised, or must we all be forced into a normal that is abnormal to some of us?”

“Whose normal is the normal-normal? Because they say we are weird? And how exactly is that normal yardstick arrived at and agreed upon to start preaching violence to same-sex loving people?” 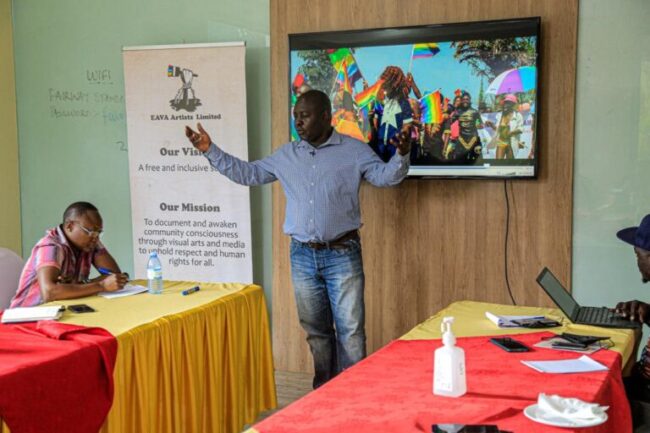 The Coalition of African Atheists and Non-Believers, a loose group of individuals and institutions, will actively support EAVA in efforts to put an end to religious homophobia.

Uganda recently passed the Succession Amendment Act, 2021. There have been loud public concerns especially among women’s rights groups that widows who are not married by Abrahamic religions or traditional marriage cannot inherit property when their spouses die.

In Uganda, the state can also register marriages. But there is wide discrimination against atheists and non-believers, especially members of same-sex couples.

Uganda’s constitution prohibits religious discrimination and stipulates there shall be no state religion. It provides for freedom of thought, conscience, and belief, and the right to practice and promote any religion, as well as to belong to and participate in the practices of any religious body or organization in a manner consistent with the constitution. Uganda is still a member of the Organisation of Islamic Cooperation (OIC), having been registered by former President Idi Amin. Some Muslim leaders advocate that the country should become a constitutional Islamic state. 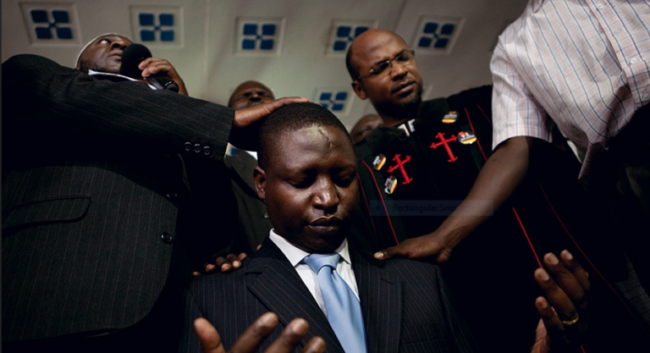 Member of Parliament David Bahati (center), the sponsor of the Anti-Homosexuality Act, 2014, is blessed by Pastor Martin Ssempa (R), Sheikh Badruh (L), and other religious leaders during an anti-gay church service at the Christianity Focus Centre, Kampala, in 2010. (Photo courtesy of Open Society Foundations)

The constitution stipulates that the government may limit people’s rights by measures that are “reasonably justifiable for dealing with a state of emergency.” The constitution prohibits the creation of political parties based on religion.

The penal code criminalizes “disturbance of religious gatherings” and “wounding religious feelings.” The country’s coat of arms bears the motto “For God and My Country.”

At the meeting in Kampala, people  observed that spouses of atheists carry a huge burden of proving to courts of law in Uganda that their marriage is valid, especially if they are homosexuals.

The United States government issued a report in 2020 about the state of religious freedoms in Uganda. That report can be accessed here. 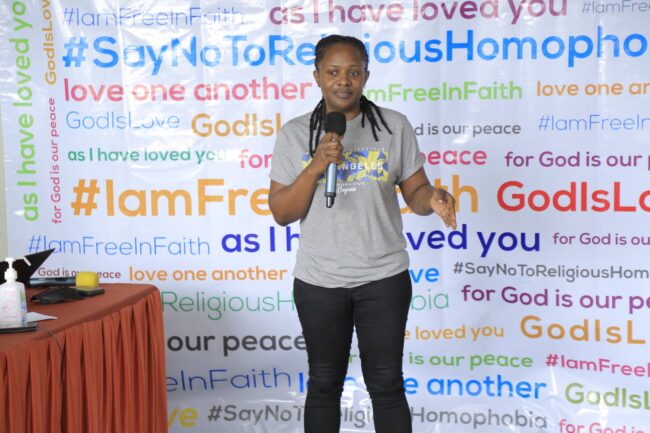 Ruth Muganzi, chairperson of East African Visual Artists board of directors, invites religious leaders to sign a pledge to Say No to Religious Homophobia, March 9, 2022 in Kampala. (Photo courtesy of EAVA)

LGBT activist Geofrey Ogwaro says he gets ridiculed when he shares his admiration for his ancestors and joy in African spiritual life. He says the African beliefs in an African God have been pushed to the margins, yet it is central to building a harmonious society.

“All of us don’t have to believe in what everyone [else] believes,” he says, noting that South Africa is more progressive in African ancestral pride. Despite a recent spike in murders of homosexuals, South Africa is seen as one of the most progressive countries on homosexual rights legal protections on the continent. 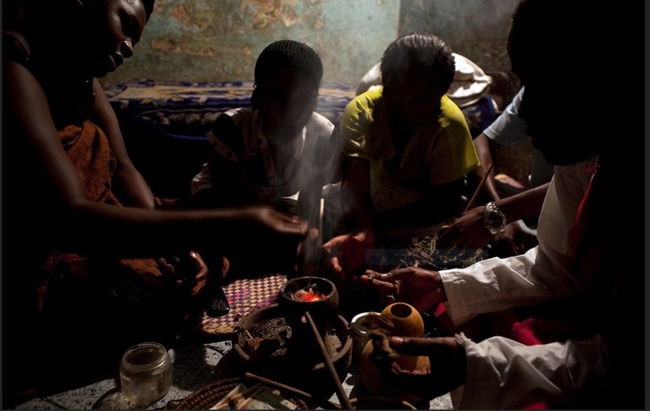 A traditional healer who is gay leads a ritual to prevent the passing of the Anti-Homosexuality Act in the Ugandan parliament. Kampala, 2010. (Photo courtesy of Open Society Foundations)