As the producer of the upcoming Nigerian film “Orgasm”,  Godwin Harrison had to find a path around roadblocks aimed at blocking distribution of LGBT-focused movies in Nigeria.  The film, set for release in April, addresses diverse issues about identity, hookup culture, love, survival, and sexuality within Nigeria’s LGBT community. 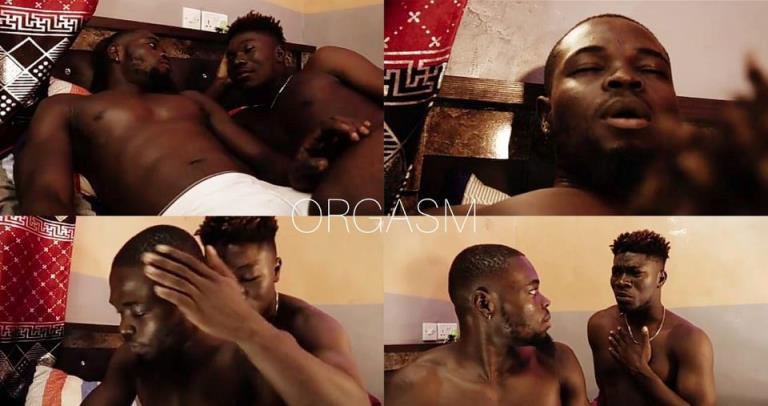 “Orgasm” tells the story of a discreet queer man whose intended one-night stand with a guy he met online twirls into a love affair.

The film, produced by HUG Media Concept, an indie Nigerian film production company, explores the ways the Nigerian queer community relies on the Internet to find love, intimacy, and community.

Speaking to NoStringsNG, Godwin Harrison, the producer of the film and CEO of HUG Media Concepts, spoke about why he made the film.

“What inspired me to tell the story is how society has confined the queer community that they have to rely on dating apps to find hookups and possibly sex. A whole lot of people go on dating apps just for a night stand but, you know, love is a strange thing and it has a way of finding you even when you least expect it.”

In Nigeria, due to discriminatory laws against LGBT people, all forms of physical organizing or socializing are largely unsafe. LGBTIQ+ people online are often lured to places where they are attacked, blackmailed, extorted, and sometimes even killed by homophobes.

However, despite these challenges, Harrison is optimistic that one can still find a good partner online, which is one of the things he tried to highlight in his upcoming film.

“The story of finding true love online is long overdue and I needed to tell the community that you can still find true love on those dating apps. Just be positive”.

Interestingly, the film also highlights the socio-cultural pressure that LGBT people endure, which makes it difficult for them to live authentically.

This issue was explored in the film, where one of the characters chose to abandon their gay partner to marry a woman just to please society — a practice that is common among gay men.

But making pro-LGBT films in a clime such as in Nigeria where homosexuality is widely condemned and viewed as taboo comes at a price.

“These stories need to be told,” Harrison said.

He shared some of the challenges he has faced while making pro-LGBTIQ+ films.

“When my last movie, ‘Broken Rainbow’, came out, I was kicked out of my job. My friends, even community members, condemned and criticized me. But these stories need to be told and whether they like it or not, they must see it”.

For the LGBT community and its allies, this is a commendable effort. However, given the fact that homosexuality is criminalized in the country, this film will not be getting a theatrical release, nor will it be released on any mainstream online streaming platforms. This is because it can be banned by the Nigerian government with claims that such films promote homosexuality.

In 2020, The National Film and Video Censors Board (NFVCB) threatened to pull down “Ìfé“, a Nigerian lesbian-themed film, if it were to be released on streaming platforms. The producers of the film were threatened with legal action if they released the film without official approval.

Harrison said he has plans to avoid similar issues. He has made arrangements with an international online gay film streaming company for the release and distribution of the film.

“Talking about sanctions from the government: we are not using any of the Nigerian distribution channels, so we are in total control of our work. As it stands now, the film [will be] distributed by GayBingeTV.”

This is the trailer for the film:

The film stars Prince Banabas and Elvis Obue in the lead roles.

Speaking to NoStringsNG, Prince said the film is a must-see and had a lot to teach about queer love and relationships.

“I think people really need to see this film. I believe there are lots of lessons to be learnt. It will teach many about the need for self-awareness, and trying to know what a relationship requires before jumping right into it. Many gay people jump into relationships without knowing what they really want out of it and this is really wrong.”

The budding actor also highlighted reasons why films like these are important. He said:

“I think films like these help tell the hidden stories and reveal hidden truth. The LGBTIQ+ community is plagued with a lot of problems that many people try to ignore. But with films like this, conversations around LGBTIQ+ issues are humanized and brought to the fore”

Mike Daemon, the author of this article, is the founder and publisher of NoStringsNG, Nigeria’s #1 media platform committed to advancing LGBT equality and providing resources for Nigeria’s LGBT community.