Many signs suggested that this week’s threatened roundup of gay Tanzanians was a nightmare that had vanished with the light of day. That might still turn out to be true, despite the news that 10 men were arrested on suspicion of “being gay” on the Tanzanian island of Zanzibar.

In a Tanzanian editorial cartoon, fleeing Dar es Salaam regional commissioner Paul Makonda is under attack from gays and straight arrows. (Cartoon courtesy of The Citizen)

Monday’s planned purge might have been an anti-gay fantasy of Paul Makonda, who, as regional commissioner of Tanzania’s largest city, had the power to scare and horrify LGBT communities worldwide, but perhaps not enough clout to launch an anti-gay crackdown over the objections of the central government. 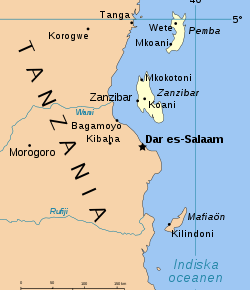 Ten men were arrested Nov. 3 on the Tanzanian island of Zanzibar, which is about 50 miles offshore from Dar es Salaam, the country’s largest city. (Map courtesy of Wikipedia)

The 10 arrests came on Saturday, before the threatened purge — after Makonda’s appeal for citizens to report anyone they suspected of being gay, but before the central Tanzanian government announced that Makonda was acting on his own, without approval.

Unfortunately, even if the threatened anti-gay purge turns out to have been just a nightmare, LGBT Tanzanians still wake to the oppressive realities of a homophobic society. Tanzanian society discriminates against LGBT people, its government shuts down HIV clinics and bars sale of lubricants in the wrong-headed belief that they encourage homosexuality, its police arrest lawyers who might challenge the crackdown on HIV clinics, and its laws, at least on paper, call for prison sentences of 30 years to life for same-sex intimacy.

Saturday’s arrests fit that homophobic pattern. The 10 men were seized at a party that police raided after getting a tip that a same-sex wedding was under way. The men are still being held, though no charges have been filed against them, Amnesty International reported.

Separate from those arrests, the announced first day of Makonda’s purge came and went quietly. Instead of a “gay roundup”:

Dar es Salaam Regional Commissioner Paul Makonda was forced to eat humble pie on Sunday when the government distanced itself from his plan to launch an “anti-gay hunt squad.”

News about Makonda’s hit squad’ attracted widespread coverage by the international media and even won condemnation from UN Human Rights chief Michelle Bachelet. By the time the ministry of Foreign Affairs was intervening to explain that the RC’s intentions did not have government blessings, the country’s image had already taken a beating internationally. …

Following the government statement, [Monday] was a quiet day for the RC who was meant to officially launch the “gay hunt squad” comprising representatives from other security arms.

For the public, the gay crackdown was yet another public posturing disaster for Makonda that only served to add to his now notorious record of jolting the people with often controversial campaigns.

Human Rights Watch welcomed the central government’s disavowal of Makonda’s plans but said the action “will mean little unless the government reforms its laws and policies that discriminate against lesbian, gay, bisexual, and transgender (LGBT) people.”

That’s unlikely in the near future, because officials from Makonda to President John Magufuli have often enjoyed acclaim from homophobic supporters for using anti-gay rhetoric.

A lower-key version of the purge might still happen along the lines of the arrests that Amnesty International reported. D

During the run-up to the threatened purge, Makonda reportedly received at least 5,763 messages from members of the public who called in the names of more than 100 alleged homosexuals.

Perhaps Makonda will still take action against them. Or perhaps he will forget about his anti-gay fantasies and focus instead on real-world issues that affect the citizens of Dar es Salaam. Newspapers in Tanzania have already moved on to coverage of important issues of security, economic development, education and agriculture.