A leader of Cameroon’s transgender community is recuperating from a transphobic attack that almost killed her.

The Bouba intersection in Yaoundé, where MP was attacked. (Photo courtesy of dailymotion.com)

Among all LGBTI people in Cameroon, transgender Cameroonians are the most persecuted physically and psychologically because their gender identity often is visible.

In response to transphobic attacks, organizations such as Transamical or Transigeance Cameroon have sprung up in Yaoundé, the nation’s capital.

Among the most prominent leaders of this community is a trans woman, identified here as MP, who embodies the trans community’s determination to fight against transphobia.

After years of campaigning on her own and through Transigeance Cameroon, she is at risk, hiding in a temporary refuge provided by a local LGBTI rights organization.

At about 11 p.m. on Sunday, June 30, MP was the victim of a transphobic attack that almost killed her.

In the Simbock area of Yaoundé, she was returning from an evening at a friend’s house when she was confronted by seven strangers with hooded faces at the Bouba intersection.

The streets were deserted, so there was no one to turn to for help. The attackers ordered her hand over her mobile phone, laptop, shoulder bag and the wallet containing her identity papers.

They called her names. One attacker asked why she was still living in Simbock. Didn’t she remember that she had been warned to leave?

She talked back to them, which outraged them. They beat her up, stripped her naked and left her for dead. 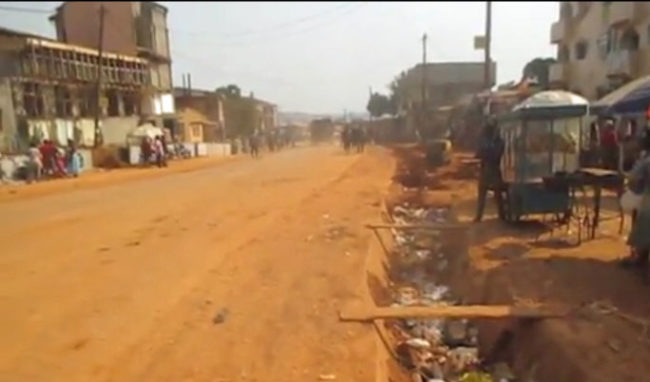 Street scene near the intersection in Simbock where MP was attacked. (Photo courtesy of DailyMotion.com)

After a moment of unconsciousness, MP stood up, got dressed and slowly made her way back to her one-room apartment.

Soon she realized how many injuries she had suffered. She called for help.

One of her neighbors took her to a small health center where she received first aid.

When she were able to leave the clinic, she could no longer return  home. Her landlord declared:

“This apartment in my establishment is not a refuge for faggots. I value my reputation and the morality of the place.”

MP currently is in a safe furnished location, but cannot stay there long. She needs psychological counseling and permanent relocation to an apartment in a safe neighborhood. She is also seeking support for an application for asylum in a country where she can live in peace.

“I realize that transphobia will never disappear in this society,” MP said, “even though we are all human beings and all equal.

“I have been struggling to save others and now, once again, I almost lost my own life.”

Please help save the life of this valiant transgender activist who is in danger in Cameroon.

Moïse Manoel, who edited this article, lives and conducts research in Paramaribo, Suriname. He is a Ph.D. candidate in sociology from the University of the West Indies. His field of study and research is homophobia and neocolonialism on the Guyana Plateau in South America.