Gay rights activists are mourning the death of Desmond Sone Mbecho, a veteran of the struggle for LGBT rights in Cameroon.

Human rights defender Desmond Sone Mbecho died Monday, Jan. 27, at Jamot Hospital in Yaoundé. He had been hospitalized for several days after being diagnosed with a severe lung infection.

For many years, Sone was a prominent defender of the rights of sexual minorities in Cameroon.

In 2014, when he was a leader of the human rights group Affirmative Action, death threats forced him to flee his home and seek refuge in a safe house.

In his work with Rainbow Cooperation, he defended LGBTI people while also promoting culture and well-being for the LGBTI community.

He worked with the Unity human rights watchdog coalition, where he was greatly admired for his frankness and good humor. He was also appreciated for his ability as a native English speaker.

According to the secretary general of the Unity Platform: “Desmond was sick but he kept reassuring us about his state of health in these terms: ‘I will be fine. Don’t worry about me. I will be going to find my parents who will take care of me.’ ”

The author of this article, Courtney Stans, is a journalist in Cameroon who writes under a pseudonym. Contact her at [email protected]

This is the article about Sone from 2014:

Cameroon: Forced to flee because of his sexual orientation

Death threats have forced a leader of the human rights group Affirmative Action in Cameroon to flee his home and seek refuge in a safe house.

Desmond Sone Mbecho, who leads the cultural and peer education section of Affirmative Action, had been working on anti-AIDS projects supported by the Global Fund (the Global Fund to fight AIDS, Tuberculosis and Malaria).

On Aug. 7, he received death threats from his neighbors, who demanded that he vacate his apartment and move out of the Ngousso neighborhood because of his sexual orientation. Affirmative Action provided the following account in a press release.

The neighbors’ death threats followed Sone’s arrest by a police officer in response to a complaint filed against him. At the police station, he learned that his landlord had filed the complaint, accusing him of practicing homosexuality.

Affirmative Action sent the leader of its human rights section to help him. The association subsequently also contacted CAMNAFAW (the Cameroon National Association for Family Welfare, which is the Global Fund’s prime contractor for its anti-AIDS work in Cameroon.) CAMNAFAW arranged for attorney Jathan Ndongo from the Global Fund project to help Sone.

The police interviewed Ndongo, Sone and his landlord over the course of two days. In the end, in the presence of police and the attorney, the landlord apologized for making a false accusation against Sone, but she still told him he should leave the premises after two weeks.

Later that evening, when Sone went to a grocery store near his home, he was surprised to find the landlord there, telling neighborhood boys that he is gay and that they should beat him up and drive him away. 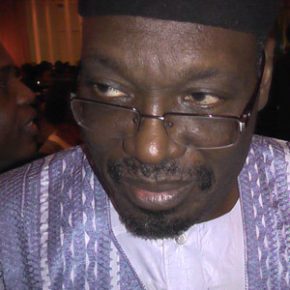 Panicked, he returned home to find a crowd of people knocking on his door and windows, uttering death threats and telling him to leave the area. After they left, Sone took refuge at a friend’s home for the night.

Currently, Desmond Sone is housed in a “safe room” at the Affirmative Action headquarters.

Affirmative Action is currently working with REDHAC (the Network of Human Rights Defenders in Central Africa) to find Sone a new home.

Meanwhile, Affirmative Action issued a statement condemning residents’ homophobia and the failure of the government to take adequate steps to curb the violence.

In particular, the group drew attention to the misstatements made last January by the Minister of Communication, Issa Bakary Tchiroma, who claimed that homosexuals live in safety in Cameroon. Bakary said at a press conference that “there is no judicial harassment” of homosexuals in Cameroon. He added: “In Cameroon, known homosexuals roam the streets freely and some of them earn their livelihoods without being bothered.”