Update on Ghana’s ‘worst anti-LGBTQ bill ever’. (To stay up to date, donate)

Ghana’s parliament is gearing up to act on a draconian proposal that has been labeled “the worst anti-LGBTQ bill ever”.  The latest news about that bill is below. Continued updates like these are possible only with your financial support. Please donate. 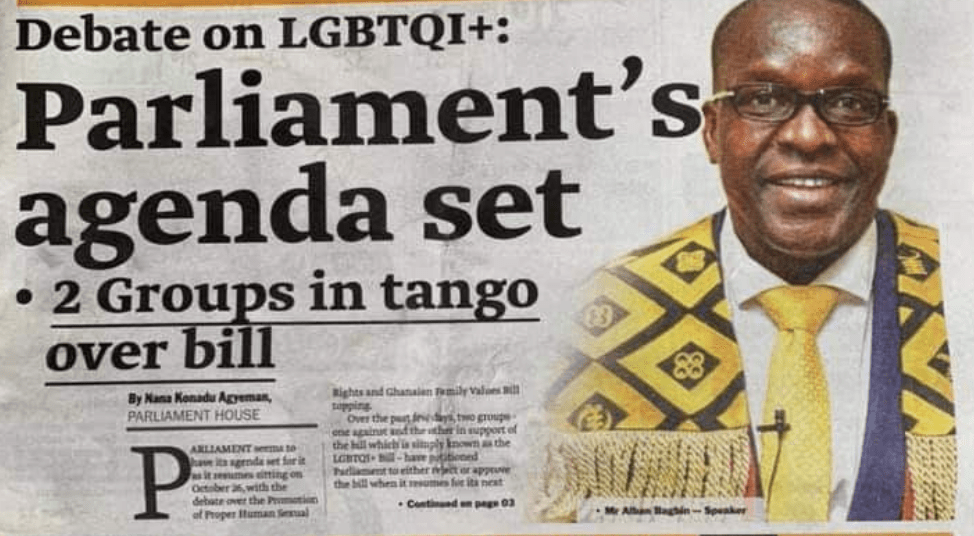 Ghana’s Daily Graphic newspaper put its article about the anti-LGBTQ bill at the top of its front page. The photo is of Alban Bagbin, speaker of the parliament, who welcomed submission of the bill last summer and has described LGBTQ activities as worse than Covid-19.

As Ghana’s parliament prepares to convene on Oct. 26, debates over a sweeping and repressive anti-LGBTQ bill are intensifying.

Hundreds of memoranda arguing for and against the bill have been sent to parliament. On Oct. 6, conservative Christians marched to Parliament House to present memoranda signed by 15,000 people supporting the bill and opposing homosexuality.

On Oct. 7, opponents of the bill presented a petition signed by 12,956 people urging Parliament to defeat the bill. Those signatures were collected since July on the Change.org petition “Reject Ghana’s anti-LGBTQ+ draft legislation”. 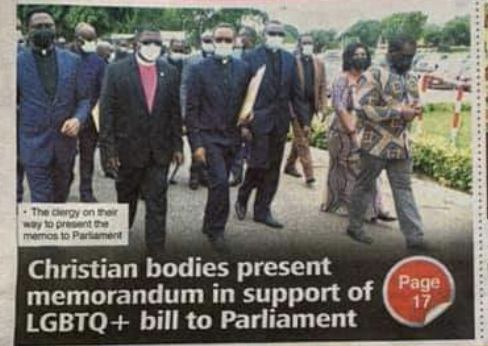 It would require citizens to report LGBTQ rights advocacy and homosexual activity to police or other authorities. The bill would  also encourage the harmful and ineffective practice known as “conversion therapy” , which claims to change people’s sexual orientation. It would put the Ministry of Chieftaincy and Religious Affairs in charge of regulating conversion therapy service providers.

For more on the bill’s repressive provisions, read the article “The worst anti-LGBTQ bill ever”.

The Daily Graphic newspaper reported that the bill’s supporters who marched to Parliament House included leaders of Ghana’s Methodist Church, Apostolic Church, Church of Pentecost, and the Christian Council of Ghana. 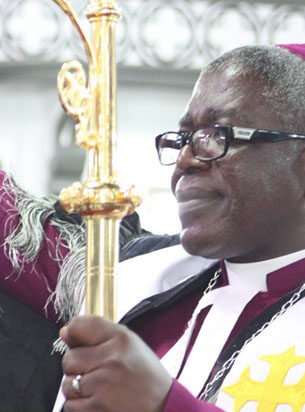 IN FAVOR: The Most Rev. Dr. Paul Boafo, presiding bishop of the Methodist Church of Ghana. (Photo courtesy of the Daily Graphic)

They warned legislators that anyone who voted against the bill “would have be voted out massively by the members of their churches/religious organisations in the next general election.”

Earlier, other statements in favor of the bill were presented by the Catholic Bishops Conference, the Assemblies of God Church, the Islamic Council and the Ghana Pentecostal and Charismatic Council.

The Most Rev. Dr Paul Kwabena Boafo, presiding bishop of the Methodist Church in Ghana, said, “Today, we are here representing a million Methodists in Ghana to say that we are in support of the bill and today we are presenting memorandum from the mother church, the children’s ministry and young people who see this bill as very good for them because it talks about their future.”

A group of academics, lawyers, researchers, civil society organizations and human rights activists submitted its own 30-page memorandum to parliament, stating that the bill is unconstitutional. It would violate freedom of expression and the media, the right to assemble and the right to join any association of one’s choice, they said

Journalism professor Kwame Karikari said the bill is dangerous. Passing it, he said, would “rob the minority LGBTQ+ group of their rights enshrined in the country’s constitution through the democracy fought and secured by their forefathers.”

Karikari, the former director general of the Ghana Broadcasting Corporation, said that, as human beings, LGBTI people are “protected by the constitution so any law that is made to arouse, promote engineer and mobilize hate against that minority is against the rights of those minority people and should not be passed.” 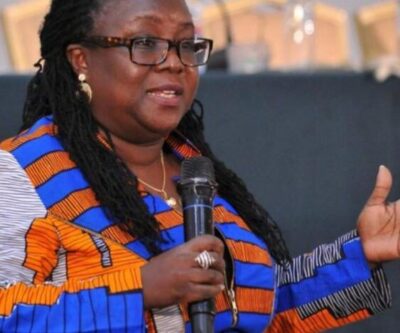 OPPOSED: Audrey Gadzekpo, former dean of the School of Information and Communication Studies at the University of Ghana. (Photo courtesy of Asaase Radio)

Audrey Gadzekpo, former dean of the School of Information and Communication Studies at the University of Ghana, said the bill in its current state violates the fundamental rights of LGBTQI Ghanaians, according to an article from Asaase Radio.

The director general of the Ghana Aids Commission, Kyeremeh Atuahene, said the bill would hinder the fight against AIDS because of “the long arm of this bill and the widespread tentacles: .. it will drive [LGBTQI people] underground and when it drives them underground it means they will not access [anti-HIV] services and that is a major concern for us.”

Well-known lawyer Akoto Ampaw said “the bill violates all the fundamental freedoms guaranteed by the 1992 Constitution,” and would “would send Ghana to the dark ages of lawlessness”.

The full text of the anti-LGBTQ proposal is here. The bill — officially named the “Proper Human Sexual Rights and Ghanaian Family Values Bill” — extends from Pages 25 to 49 of that document after a 24-page introduction by the bill’s sponsors. The document was compressed for uploading, which introduced some formatting errors.

To support this site’s LGBTQ rights advocacy journalism, donate to the St. Paul’s Foundation for International Reconciliation, which is the site’s financial sponsor.

Donations — all of which  are used to support the work of LGBTQ advocacy journalists — can be made via: