The Ugandan government has relieved Maj. Gen. Abel Kandiho of his role as Commander of the Chieftaincy of Military Intelligence (CMI), weeks after the US Treasury Department imposed financial sanctions on him over alleged human rights abuses committed under his watch. He has been posted to South Sudan as a special envoy. 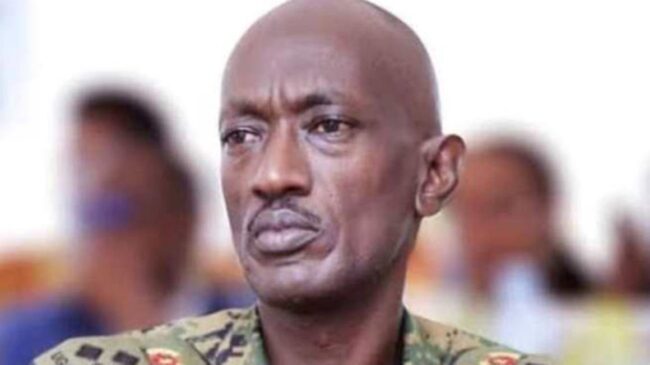 Maj. Gen. Abel Kandiho has been accused by the US Treasury Department of being directly involved in serious human rights abuses as Commander of the CMI. (Photo courtesy Daily Monitor/NMG)

In a Dec 7, 2021 press release, the Treasury Department alleges that Kandiho was directly involved in the human rights abuses against people targeted by the CMI for their nationality or political views.

“Individuals were taken into custody and held, often without legal proceedings, at CMI detention facilities where they were subjected to horrific beatings and other egregious acts by CMI officials, including sexual abuse and electrocutions, often resulting in significant long-term injury and even death. During these incarcerations, victims were kept in solitary confinement and unable to contact friends, family, or legal support. In some cases, Kandiho was personally involved, leading interrogations of detained individuals,” the press release says.

CMI has been accused of intimidating LGBT rights advocates and community members and of putting them under surveillance.

Ugandan human rights lawyer and LGBTQ ally Nicholas Opiyo was apparently targeted by CMI in September 2020. He says that after his mobile phone was stolen, his Find My iPhone app notified him that it had been moved to Chwa II Road, Mbuya, Hill, Kampala — CMI headquarters.

In his new role, Kandiho will work with a Ugandan Army mission stationed in Juba, South Sudan to help monitor compliance with a peace agreement signed in February last year between the South Sudan government and rebel forces.

He will be replaced as Commander of the CMI by Maj. Gen. James Birungi, who was previously head of Special Forces.

The Ugandan government has not given a statement explaining why Kandiho has been transferred.