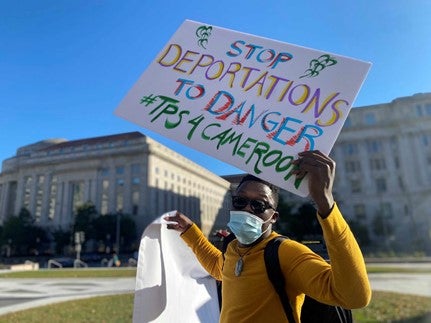 Daniel Tse, coordinator of the Cameroon Advocacy Network, an immigrant rights coalition, holds a sign calling for a halt to U.S. deportations to Cameroon and for Temporary Protected Status (TPS) for Cameroonians in the U.S., due to widespread safety risks in Cameroon. (Photo courtesy of CASA)

That was the conclusion of a new 149-page report about what happened to an estimated 80 to 90 Cameroonians deported from the United States between 2019 and 2021.

Those deportees were abused in the U.S. immigration/asylum system and then, after being deported, faced arbitrary arrest and detention; enforced disappearances; torture, rape, and other violence; extortion; unfair prosecutions; confiscation of their national IDs; harassment; and abuses against their relatives, HRW stated.

The report notes that Cameroon’s homophobic laws are a reason why some LGBT Cameroonians flee. It states that LGBT Cameroonians whose requests for asylum in the U.S. are denied “face particular risks if returned”:

“Lesbian, gay, bisexual, and transgender (LGBT) people face risks across Cameroon due to a law criminalizing same-sex conduct and an upsurge of anti-LGBT persecution in 2021.”

But the report focuses on deportees who fled from Cameroon for a different reason — the effect of armed conflict between government forces and separatist groups in Cameroon’s Anglophone regions. 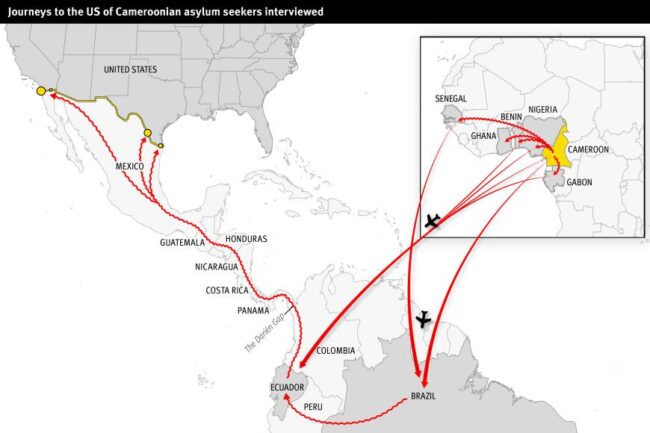 Map shows how asylum-seekers from Cameroon reached the U.S. (Map courtesy of HRW)