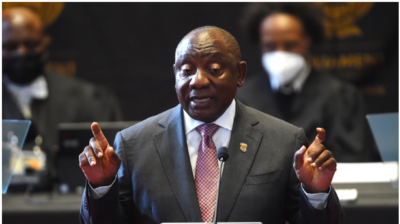 Speaking at a Freedom Day celebration in Mpumalanga, Ramaphosa said, “Today in a free South Africa, those that want to practice same-sex marriages can do so. And they are able to adopt children and even inherit children from their partners. That is the freedom we have and celebrate in South Africa today.” See: 1:46 of his speech here.

Homosexual activity remains outlawed in more than 30 of Africa’s 54 countries; in a few, it is punishable by death. Many LGBTQ Africans are subject to stigma and abuse, facing unemployment, homelessness and estrangement from their families.

South Africa is the only African country that has legalized same-sex marriage, and its constitution protects against anti-LGBTQ discrimination. Yet even there, violence against LGBTQ people remains common.

In January, global human rights organisation Human Rights Watch  wrote to the South African government about killings and assaults on LGBTI people “in circumstances that suggest their sexual orientation or identity was the reason that they were targeted.”

Many LGBT people in South Africa still live in fear for their lives. (Photo courtesy of them.us)

This is a slightly edited version of an article titled “Ramaphosa praises homosexuality”  that first appeared in Bulawayo 24 News.