Security forces in Cameroon are failing to protect LGBTI people from violent attacks and instead are arresting the victims, Human Rights Watch said in a press release on May 11. 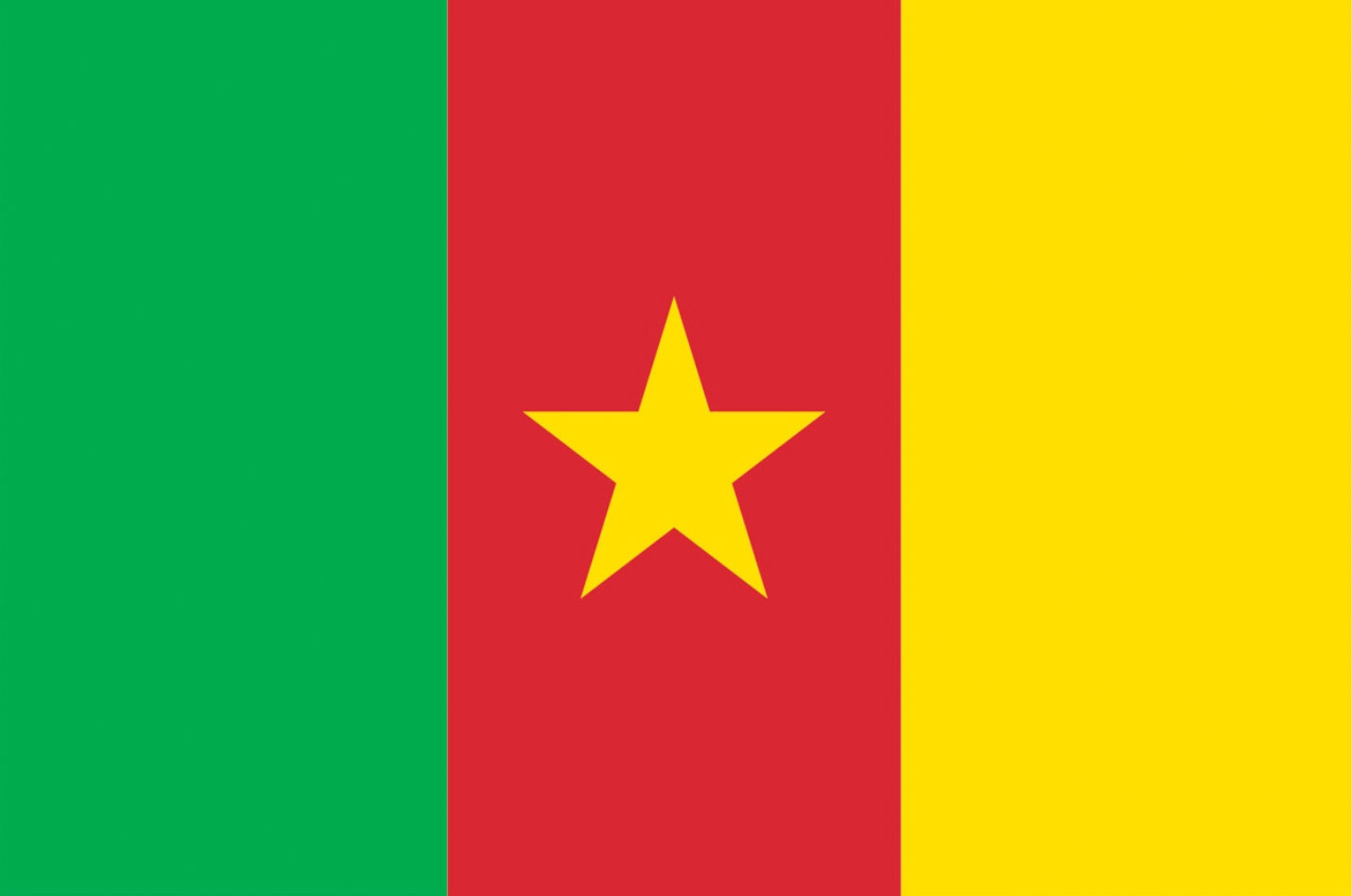 Those attacks and arrests are part of an uptick in violence and abuse against LGBTI people in Cameroon in 2022, according to a leading civil society group.

This is HRW’s press release:

Security forces in Cameroon are failing to protect lesbian, gay, bisexual, transgender and intersex (LGBTI) people from violent attacks and instead are arresting the victims, Human Rights Watch said today. There has been an uptick in violence and abuse against LGBTI people in Cameroon in 2022, according to a leading civil society group.

Since March 9, security forces have arbitrarily arrested at least six people and detained 11, all of them victims of group attacks, for alleged consensual same-sex conduct and gender nonconformity. Gendarmes beat two of them in detention.

“Cameroon’s law criminalizing same-sex conduct has created a climate that allows both other Cameroonians and security forces to abuse and assault LGBTI people without consequence,” said Ilaria Allegrozzi, senior Central Africa researcher at Human Rights Watch. “The authorities should take urgent action to revoke this discriminatory law and to ensure that the human rights of all Cameroonians, regardless of their sexual orientation, gender identity, or sex characteristics, are upheld.”

Cameroon’s law prohibits consensual same-sex relations, a crime punishable with up to five years in prison. Since Cameroon’s penal code criminalizes consensual same-sex conduct, not LGBTI identity, arrests of people on the basis of perceived identity are unlawful. Nonetheless, the legal environment, compounded by widespread social stigma and discrimination, allow violence to proliferate, while security forces fail to protect LGBTI people from group violence and instead arrest and detain those who report it.

Human Rights Watch shared its findings with Justice Minister Laurent Esso; Yves Landry Etoga, the state secretary at the Defense Ministry in charge of the national gendarmerie; and Martin Mbarga Nguele, the delegate general for national security, in separate letters sent on May 2 requesting answers to specific questions on the findings. None have responded.

Since the beginning of the year, the Cameroonian Foundation for AIDS (CAMFAIDS), a prominent human rights organization advocating for LGBTI people, said it recorded 32 cases of violence and abuse against LGBTI people across the country, an increase of 88 percent from the same period in 2021.

Logo of the Cameroonian Foundation for AIDS (Camfaids)

On April 10, between 7 and 9 a.m., a crowd of about eight men armed with machetes, knives, sticks, and wooden planks, attacked a group of at least 10 LGBTI people who had attended a party at a private home in the Messassi neighborhood in Yaoundé, Cameroon’s capital. Witnesses told Human Rights Watch that the armed men first beat a watchman, then stormed the house and pursued their victims through the neighborhood. They severely beat 10 LGBTI people, witnesses and victims interviewed reported.

“Three men kicked me, slapped me, pulled me by my clothes, stole my bag with my phone, and money just because they said I am gay,” one of the victims said. “The entire neighborhood was outside watching how as I was being assaulted … None dared to help me.”

A local official from the neighborhood attempted to assist two of the victims, taking them to a gendarmerie brigade. However, the gendarmes on duty beat and humiliated them, then released them later that day after they paid a bribe of 15,000 CFA (US $24).

“Gendarmes held us at the entry of the brigade, on the floor,” said a 21-year-old man. “They called us ‘faggots,’ ‘devils.’ They said: ‘We should kill you because you are monsters and searched our phones looking for any ‘evidence’ that we were gay. They ordered us to remove our shoes and beat us on the soles of our feet with a machete.’”

The other eight LGBTI people remained in the hands of the violent crowd for at least two hours. Some were injured and robbed, including of money and phones. On April 13, CAMFAIDS filed a complaint with the gendarmerie on behalf of the victims for assault, battery, inhuman and degrading treatment, theft, threats, defamation, and trespassing. The gendarmerie investigation is pending. 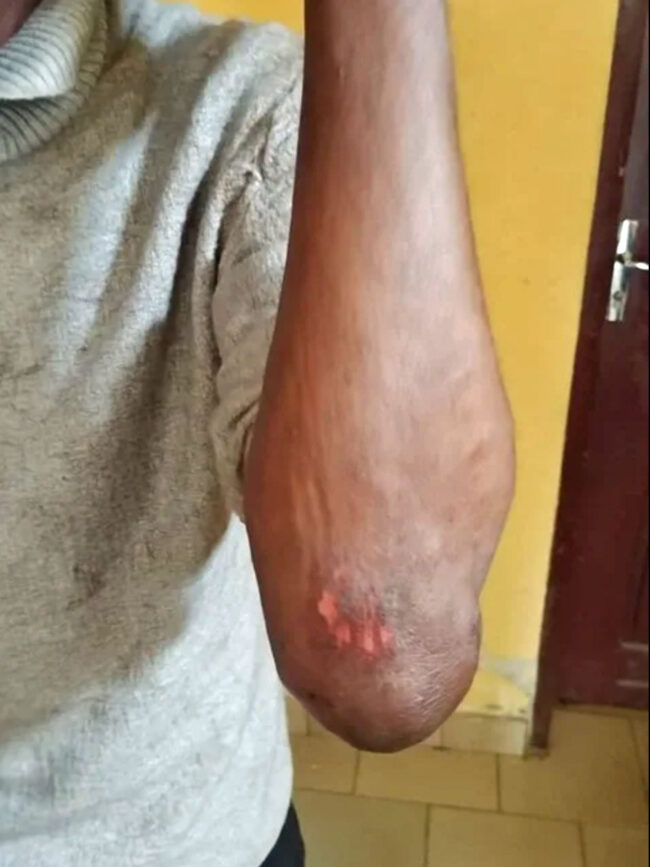 Injury suffered by a 32-year-old teacher who was attacked on March 9, 2022, by a group of people accusing him of homosexuality in Buea in southwestern Cameroon. (Photo courtesy of HRW)

The United Nations Human Rights Committee has ruled that the criminalization of consensual same-sex conduct between adults violates the International Covenant on Civil and Political Rights (ICCPR), to which Cameroon is a state party. The Yogyakarta Principles, on the application of international human rights law in relation to sexual orientation and gender identity, assert that states are required to “…prevent and provide protection from cruel, inhuman or degrading treatment or punishment, perpetrated for reasons relating to the sexual orientation or gender identity of the victim, as well as the incitement of such acts.”

The African Commission on Human and People’s Rights explicitly calls on member states, including Cameroon, to protect sexual and gender minorities in accordance with the African Charter and has urged governments to protect people from violence based on sexual orientation and gender identity, and to bring attackers to justice.

“Cameroon’s criminalization of same-sex relations not only violates its obligations under national and international law but condones an atmosphere of violence and hate against LGBTI people,” said Alice Nkom, a prominent Cameroonian human rights lawyer and LGBTI activist.

Human Rights Watch also documented group attacks against two transgender women in 2021, and against an intersex person in Yaoundé in November.

“LGBTI people are being assaulted, threatened, and humiliated in the street while their attackers go free” Allegrozzi said. “Cameroon’s authorities and security forces should be protecting people, not violating their rights because of their presumed sexuality or gender identity.”