By a staff writer

The Uganda Human Rights Commission (UHRC), the statutory body mandated to monitor human rights and freedoms in the country, has released its 2021 report to Parliament with a direct call to the army and police forces to “desist from aggressive and brutal enforcement of directives such as caning people.” Unlike in past reports, the commission’s report this year completely ignores LGBTI people. 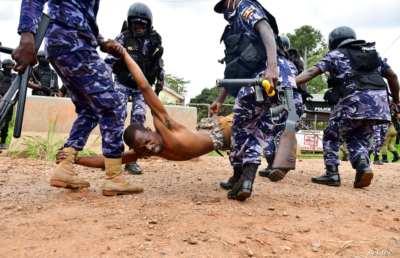 A man begs for his life at the hands of Uganda Police. Both Uganda police and the army have been called out over use of excessive force during arrests in 2021. (File photo)

By ignoring violations of human rights of LGBTI Ugandans during the past year, including mass arrests at an LGBTI shelter in May 2021, the 304-page report presents an inaccurate portrayal of the nation’s human rights record.

Still, the UHRC found much to criticize. Its report, presented to the Uganda Parliament on June 13 in Kampala, analyzes human rights violations and makes recommendations about how Ugandan authorities should improve their human rights record.

“Our aim in presenting this Annual Report is to give to the Parliament of Uganda, various government departments, strategic partners and the general public an appraisal of the human rights situation in Uganda in the year 2021,” notes the report, signed by Margaret Lucy Ejang, the acting secretary to the commission.

The commission registered a total of 611 human rights complaints during 2021, 75 percent of them from men and 25 percent from women. Many of the men’s complaints involved torture and deprivation of personal liberty, which are more frequently experienced by men. Men are also more usually in conflict with the law; hence they are more prone to having their human rights violated by law enforcement personnel.

Most complaints reported by women were related to family matters or children’s rights. 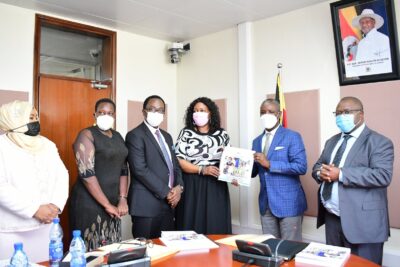 The commission urged restraint by the military and police, as well as extensive work to protect citizens against the Covid-19 virus. These were key recommendations:

1. The Uganda People’s Defence Force and Uganda Police Force should desist from aggressive and brutal enforcement of directives such as caning people, as this undermines the dignity of the person.

2. The Ministry of Health should ensure that all health workers are routinely tested for Covid-19 and provided with protective gear in the course of their work.

3. Through the Ministry of Finance, Planning and Economic Development, the Ugandan Government should provide budgetary support at the community level to enhance the ability of communities to detect and report cases of Covid-19.

4. Through the Ministry of Health, the Ugandan Government should strengthen emergency response capacity and systems at all levels to detect emerging and new variants of Covid-19 early. 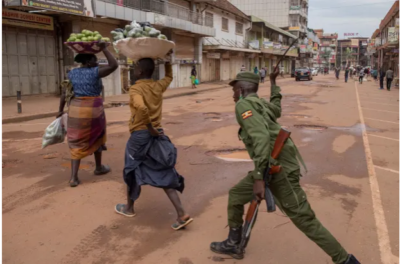 5. Through the Ministry of Health, the Ugandan Government should optimise vaccination by enhancing uptake, ensuring vaccination efficacy and understanding specific vulnerabilities.

6. The Ugandan Government should adopt innovative multi-sectoral and tailored approaches to address Covid-19 effects, including violence against children, men and women. The issue of livelihoods and food security must be resolved as a critical bottleneck to compliance.

7. Children and adolescents should be effectively targeted in Covid-19 interventions. They need awareness, products (e.g. fitting face masks), voice and protection from the effects of Covid-19, including being witnesses to and victims of different forms of violence.

Local Uganda media is reporting that some  experts and rights activists have criticized the report for paying too little attention to human rights violations that occurred during the 2021 general elections.

As quoted in The Independent, Sylvia Namubiru, the executive director of the Legal Aid Service Provider’s Network (LASPNET), said that the report only speaks of political rights in “a scattered manner” even though last year who filled with political turbulence.

The report mentions, but does not resolve questions about, enforced disappearances, including a list of more than 300 persons who allegedly vanished. The report notes that many of them vanished before scheduled court appearances. Separately, the commission said it received reports of 69  disappearances, which it Investigated and resolved, except for five.

For instance, she says, there were arrests conducted on election days involving opposition members, violations of freedom of expression and association, and torture among others, which the report doesn’t mention.

Another aspect of political and civil rights raised by Namubiru was the shrinking space of Civil Society Organizations, which ultimately affects the democratic process of an election.

She specifically referred to the closure of 54 Non-Governmental Organizations, a move that affected their plan to work together to monitor elections, provide civic education, and advocate for a democratic electoral process.

The report also should have raised the issue of the Internet shutdown during the election season, which occurred while movement was limited to control Covid-19, she noted. The shutdown, coupled with mistreatment of media personnel, especially by security personnel, should have been covered in the report, she said.

Sarah Bireete, the executive director of the Center for Constitutional Governance, observed that the report concentrates mostly on social and economic rights. It merely pays lip service to political and civil rights even though 2021 was a year when elections were held in the unusual environment created by the Covid-19 pandemic, she said.