Ugandan Pastor Martin Ssempa is back on the warpath against gay rights. In a new video, he states that, after a sabbatical, he has returned to the fray to combat “the gay agenda” once again. 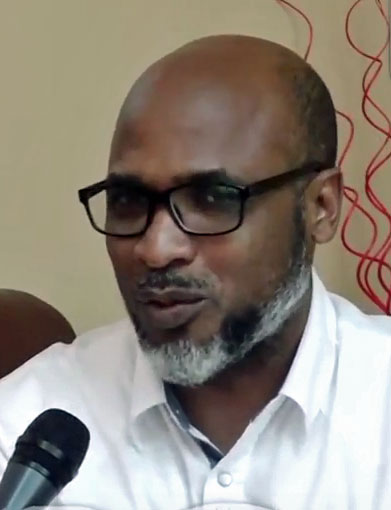 In an attempt to elicit disgust from church members, Ssempa is notorious for showing gay pornography in churches and declaring that gay men “eat the poo poo.”

Now he claims that he and anti-gay allies such as Ethics Minister Simon Lokodo and U.S. pastor Scott Lively are victims of a gay conspiracy.

It’s time to push back against gay rights, he says, because former U.S. President Barack Obama is out of office. Ssempa declares outrageously that Obama made “promotion of homosexuality” his No. 1 priority, which Ssempa says hampered efforts to fight poverty and AIDS.

In fact, Ssempa and other homophobes have been hindering the fight against AIDS for years, limiting LGBT people’s access to health information and health care by opposing programs that serve the LGBT community.

Similarly, as gay-rights activist the Rev. Albert Ogle explained in 2012, Ssempa blocked efforts to curb the HIV epidemic among LGBT Ugandans because he and other anti-gay crusaders persuaded health-care professionals that gays are deviants who should be locked up. Ogle’s attempts to provide Ugandan doctors and nurses with training about the needs and realities of minority sexuality were unsuccessful.

Ssempa claims that he is a victim because a 2013 court case and a related petition sought to persuade the International Criminal Court to prosecute Ssempa for crimes against humanity. That appeal to the ICC also sought prosecution of anti-gay Ugandan legislator David Bahati and anti-gay Ugandan publisher Giles Muhame.

Proscovia Awori, a Ugandan lesbian based in the United Kingdom, rejected Ssempa’s claim that he is a victim. She stated:

As a Ugandan lesbian it makes me sick to hear Pastor Ssempa coming back to start his anti-gay persecution crusades. The world can do with more love than hate from people who claim to be representing God on the universe.

Pastor Ssempa should not be allowed to play the victim card that he was persecuted because of his views towards homosexuality. The world knows who the real victims are. I also wonder the kind of African history books Pastor Ssempa has been reading.

We are ready to continue challenging his venomous message.

Ugandan journalist Kikonyogo Kivumbi reported last year on Ssempa’s quarrels with other pastors and the suffering that Ugandans have experienced because of Ssempa’s work with anti-gay American Pastor Scott Lively:

Working with a vast network of Ugandan born-again anti-gay Christians, Lively derailed Uganda’s achievements in fighting HIV/AIDS by claiming that people who are HIV-positive are morally bankrupt. In the years after he launched his anti-LGBT campaign, the level of HIV infections in Uganda, which had been dropping, began to rise once again.

Lively’s influence was spread by one of his Ugandan allies, Pastor Martin Ssempa, a Uganda-born American national who has been very close to Uganda’s First Lady, Janet Museveni, who also is a born-again Christian. Ssempa, has been convicted by a Ugandan court on charges stemming from his smear campaign against fellow pastors who did not believe in his anti-homosexual agenda and his calls for excluding LGBT people from health care. Ssempa has been in hiding since a U.S. judge ordered him to appear in court along with Pastor Lively.

Janet Museveni’s sympathies for Ssempa became clear during legal proceedings in Kampala in 2011. Witnesses referred to her as a backer of smear tactics by Ssempa and others, who made sodomy accusations against Robert Kayanja, a “prosperity evangelist” Christian pastor, TV star and younger brother of John Sentamu, the Anglican Archbishop of York, England. The campaign allegedly was organised by three competing clerics — Martin Ssempa, Solomon Male and Bob Kyazze.

Ssempa, Male and Kyazze; their lawyers, Henry Ddungu and David Kaggwa; their agent, David Mukalazi; and a state house employee, Deborah Anitah Kyomuhendo, were tried on charges of conspiring to injure Kayanja’s reputation.

In court testimony, an orphan who was in the choir at Kayanja’s upmarket Church, the Miracle Centre Cathedral with a sitting capacity then of 10,000 people, said he was told that the sodomy accusations against Kayanja were supported by “big people” in the State House, including Janet Museveni.

An earlier court hearing named State House employee Kyomuhendo as being “sent by Janet Museveni” to organise the smear with Mukalazi. Two witnesses said they were offered 50 million Ugandan shillings (US$19,000 then) to tell the police that Kayanja had sodomised them.

One accusation had been that a boy was sodomised after a music competition in 2009 at Kayanja’s church. After his choir won the competition, Kayanja supposedly drove him in a car with tinted windows to an unidentified Kampala hotel, under the guise of congratulating him. Instead, in the fabricated account, Kayanja sodomised him, then called a medical doctor to stitch up his anus and to declare him insane and put him in Kampiringisa Health Centre for a month.

Janet Museveni has had close ties with Ssempa — known internationally for his anti-gay “eat the poo poo” video — since the 1990s, including through joint work on abstinence-focused anti-HIV/Aids campaigns funded with millions of dollars by the Bush White House.