Introducing “Queer Squad”, a new comic book that opens to a flirtatious late-night Grindr exchange between a Tunisian bisexual trans man and a gay Brazilian cisgender man. They’re two of the characters in the new Tunisian comic that highlights modern relationships and LGBTQ+ life during the COVID-19 pandemic in Tunisia. 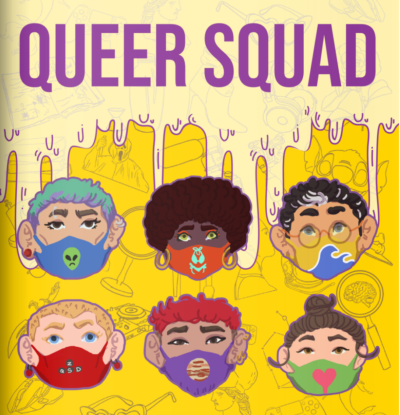 The cover page of “Queer Squad” features the comic’s six LGBTQ-identifying characters in masks. (Photo courtesy of Mawjoudin: We Exist)

The LGBTQ+ advocacy group Mawjoudin: We Exist recently released its new comic book “Queer Squad”, offered in both English and Arabic, to highlight the diversity within the queer community and to spread awareness about the existence of LGBTQ+ communities in Tunisia. 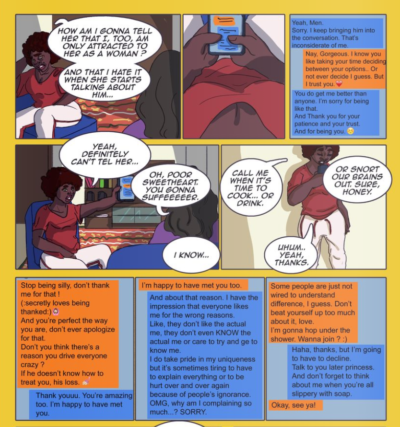 Throughout the first installment of the comic, the characters discuss their identities, their romantic interests, and the day-to-day challenges of their lives in quarantine. Much of the dialogue is presented text-message style, with chat boxes of text between characters — a nod to the pandemic-driven virtual world in which we currently live.

The comic’s six characters, who are individually profiled in the last three pages, identify variously as intersex pan-greysexual, lesbian, polyamorous, transgender, heterosexual, and queer. Producer Karam Aouini and illustrator Anis Megharia stated that the first episode is “focused on [types of] love, gender and sexuality that weren’t presented before … linked to the COVID-19 context.”

Mawjoudin’s “Queer Squad” unabashedly embraces the nuances of sexual orientation and gender identity within the LGBTQ+ community. In one scene, Nawress, a lesbian woman, exchanges text messages with an intersex person named Rym. Nawress struggles with her feelings for Rym, admitting that she’s only attracted to Rym “as a woman.” Rym, however, is frustrated with being misunderstood and misgendered by others. In another scene, Zach, a bisexual transgender man, messages a Grindr match from Sao Paulo about his identity and the improving acceptance of LGBTQ+ people in Tunis. He jokes pridefully, “My mental ‘illnesses’ make me who I am.” 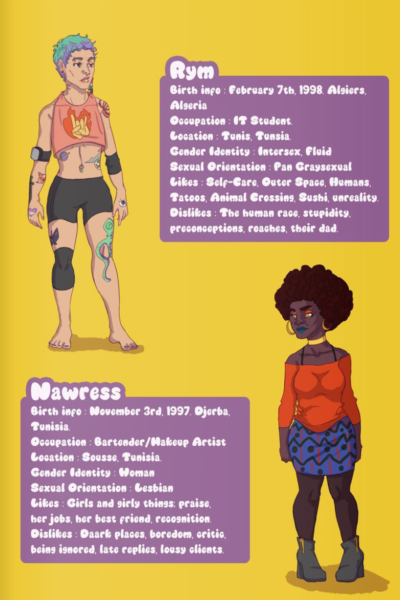 The end of the comic features in-depth profiles of the “Queer Squad” characters. (Photo courtesy of Mawjoudin: We Exist)

Mawjoudin: We Exist says that acceptance of the LGBTQ+ community in Tunisia has improved since the 2011 Arab Spring revolution. Though Article 230 of the 1913 Penal Code still criminalizes sodomy and is employed to penalize homosexuality of both men and women, LGBTQ+ safe-spaces are growing and LGBTQ+ communities are gradually receiving more tolerance by Tunisian society. The organization hopes that art and pop-culture works such as “Queer Squad” will help expose Tunisians to LGBTQ+ identities and advance the fight for legal protections.

Mawjoudin is best-known for its annual queer film festival in Tunis, Tunisia, highlighting the visual and cinematic artistic works of LGBTQ+ creators. The organization also hosts workshops focused on gender and sexuality and recently launched its LGBTIQ Asylum Project, which assists migrants with the asylum process and provides information about LGBTQ+ resources in Tunisia.

Look out for upcoming volumes of “Queer Squad” from Mawjoudin: We Exist.

Bridget Stauss, the author of this article, studies history and international relations at Amherst College in the United States.